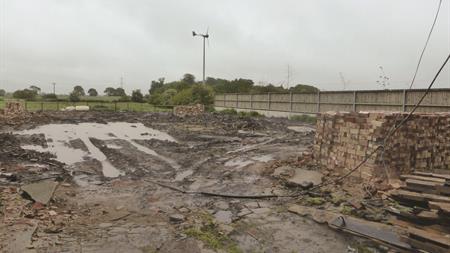 The Health and Safety Executive (HSE) visited a site in Preston, Lancashire, in June 2015, where the client, Sherwood Homes, had appointed a principal contractor (PC) to plan, manage and carry out the conversion of a farmhouse and barns into several homes.

The inspection found a range of issues, including one labourer working on a poorly erected tower scaffold with no handrail, and another using an angle grinder on the stonework without dust suppression, local exhaust ventilation, or respiratory protective equipment.

The power cable for the grinder was a twin-and-earth flat cable with a domestic extension lead, "which was not appropriate and was trailing across the site through several puddles", HSE principal inspector Dorothy Shaw told IOSH Magazine.

There was no construction phase plan and the HSE had not been informed of the project before work started. The Construction (Design and Management) Regulations 2015 (CDM 2015) state the HSE must be notified of a construction project on an F10 form if the work is expected to last longer than 30 days and involves more than 20 workers at any time.

Shaw said: "We also asked for copies of the asbestos survey and risk assessments and method statements, but none were forthcoming."

The HSE issued two prohibition notices on contractors to stop using the tower scaffold and extension cord and two improvement notices on Sherwood Homes to improve its awareness of its client duties under CDM 2015.

In February 2016 the former director of Sherwood Homes, Peter Kiely, attended an interview under caution, during which Shaw said he "accepted that his selection of principal contractors wasn't good enough. He accepted that his processes were lacking and essentially gave the impression that this was a big wake-up call and he would put lots of effort into getting health and safety right in the future."

A year later, on 13 February 2017, the HSE visited another of Sherwood Homes' construction sites in Tarporley, Cheshire, "to check whether Kiely's promises had been fulfilled", Shaw said. Inspectors found the F10 -- which was not displayed in the construction site office -- named Kiely Groundworks as the PC. However, no one from the company was present on site. Further enquiries revealed that Kiely Groundworks was due to be struck off the companies register.

Shaw said: "There was no real management on site and there was no construction phase plan again."

In addition, there was no traffic management plan to segregate pedestrians from moving plant and no adequate welfare facilities.

"The conditions were very poor and, given the promises that had been made previously, we proceeded to bring this prosecution," the inspector added.

Since early 2014 the HSE has carried out nine inspections at four Sherwood Homes construction sites, serving 16 enforcement notices and nine notices of contravention.

At Manchester and Salford Magistrates' Court on 24 July Sherwood Homes was found guilty of breaching reg 4(1) of CDM 2015, under which clients must make suitable arrangements for managing a project. The company denied the charge. It pleaded guilty to breaching regs 6(2) and 6(3) of the same regulations over its failure to notify the HSE about the development in Preston, and for failing to display the F10 notice at the Tarporley site.

No one from Sherwood Homes was present in court and the district judge agreed to hear the case in absentia. He fined the company £76,000 with £14,651 costs, and gave it three months to pay.

Shaw said: "The primary duties of the CDM regulations are with the client. Fundamentally, the client has ultimate control over what happens because they have the money, they appoint the contractors and they appoint the designers.

"If they appoint sufficiently competent contractors and allow sufficient resources in time and money, you will get a safe and healthy project. The real failings here were the client ['s] because these contractors were clearly not competent."