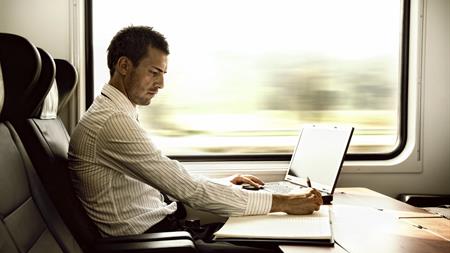 Over 24 million people commute to and from work each day in England and Wales, for an average of 56 minutes. The majority of these commuters travel using non-active methods of transport, such as cars, buses and trains. The Royal Society for Public Health's (RSPH) report, Health in a Hurry, draws on research that indicates "passive commuting" can negatively impact health and wellbeing.

Analysis of data from the British Household Panel Survey, for example, found a positive correlation between commute length and number of GP appointments, while figures from the Office for National Statistics revealed that commuters have on average lower life satisfaction, lower levels of happiness and a higher level of anxiety. These effects were particularly marked for those commuting between 61 and 90 minutes per day, the report says.

Another study found that commuting can lead to physical effects, such as an increased pulse rate and higher blood pressure. Similarly, other studies have demonstrated a connection between commuting and a higher body mass index.

Shirley Cramer CBE, chief executive of the RSPH, said: "Over the past decade, we have seen greater discussion and recognition of the importance of workplace health; however, the impact of the rush hour commute to and from work is often ignored, despite the growing evidence of the detrimental impact for our health and wellbeing.

"Our commute is often a strain on both the finances and free time of workers, with a lasting impact on their stress levels of wider wellbeing long after reaching work or returning home."

In an opinion poll commissioned by the RSPH in August (sample: 1,500; weighted sample: 1,060), commuters listed journey delays, overcrowding, antisocial behaviour, uncomfortable temperature and long commutes as the factors they felt were most detrimental to their health and wellbeing.

The RSPH said flexible and remote working would enable employees to avoid commuting during rush hour, or perhaps reduce the amount of time spent commuting altogether -- an approach, it said, that is arguably more conducive to achieving a work-life balance.

The report cites The Work Foundation's survey of managers -- Working Anywhere: A winning formula for good work? -- which found that 54% believe they 'get more done' when working remotely. And a study conducted by the CIPD in May 2012 -- Flexible working provision and uptake -- found that 56% of employers noted a drop in absenteeism following the introduction of flexible working, 58% saw an increase in productivity and 73% reported an increase in motivation.

The availability of part-time season tickets would make flexible working a more realistic option for commuters, the RSPH added. At the moment, workers who commute by train must either purchase a season ticket and lose money on the days they don't use it, or buy individual peak-time tickets.

The RSPH's opinion poll also revealed the percentage of commuters who felt their journey to and from work reduced time spent on other activities, such as exercise (40.8%), preparing healthy meals (37.8%) and sleeping (35.6%). Additionally, 32.8% said they snacked more, while 28.9% of commuters believe their consumption of fast food increased. In light of these findings, the RSPH has urged the government to restrict unhealthy food and drink outlets in stations.

"Transport companies have a captive audience for health promotion, be it in terms of journey time or the waiting time in stations or at bus stops. We should take full advantage of the opportunity this presents, minimising the temptation of unhealthy behaviours through station outlets, vending machines and advertising, and instead promote healthy activities, through a more diverse array of outlets, including station-based healthy living pharmacies," says the report.

"We call on Network Rail [-¦] to amend their station design guidelines to introduce 'health and wellbeing' as a key consideration in design station retail and catering facilities and station advertising. We also call for local authorities to be given greater powers to restrict the types of advertising present in locations for which they have responsibility such as bus stops and bus shelters on the basis of health and wellbeing."

Alongside this, the RSPH called on the Department for Transport to introduce health and wellbeing as a specification in transport franchises. While some operating companies already give out water on hot days and offer free Wi-Fi, it said that establishing reduced light or noise carriages would create a healthier, less stressful travelling experience for commuters.

And declassifying first class carriages on commuter trains would help free up some additional seating and tackle overcrowding -- an issue that can have a detrimental impact on commuters' stress and anxiety, according to the report.

Cramer concluded: "Transport is inextricably linked to the health and wellbeing of our workforce -- this must no longer be treated as a separated issue and instead, we call on Government and transport operating companies alike to ensure that the public's health is a central consideration for all transport planning decisions."