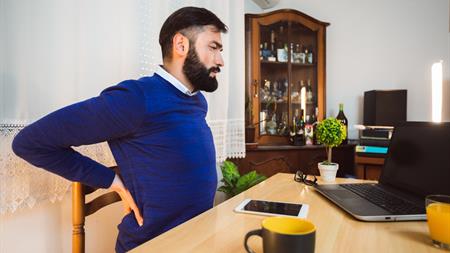 The survey of 897 UK employees who work at least two days a week from home, found that one in five employees had received a workstation assessment in person. BHSF says that although businesses are investing millions of pounds on office ergonomics, they are failing to extend the same care to home workers, with women feeling particularly let down and those over 50 being particularly vulnerable. The not-for-profit insurer added that a failure to protect employees who are benefiting from flexible working practices could result in a rise in musculoskeletal issues in the future.

Three-fifths of respondents said they had received no help or guidance from their employer on how to set up their workstations correctly. Only 36% had received support. Of these, 60% had received an ergonomic assessment -- 22% in person and 38% online. Since they began to work from home, 37% admitted they had noticed new back pain.

Women reported a higher level of dissatisfaction. Only 30% said they had received help to set up their workstations, compared with 45% of men. The survey also found that women were less likely to have a dedicated office in their home -- 30% had workspace set aside, compared with 43% of men.

Older home workers were also more vulnerable. Only 26% of those aged over 50 could remember receiving assistance from their employer to set up workstations correctly.

A contributing factor to the back pain reported was the lack of a proper workstation. Of those surveyed, 27% said they worked at tables rather than desks, 11% worked from their sofas, and 3% admitted working from their beds.

Stuart Nottingham, physiotherapy lead for BHSF, said: "There is a lot more that employers could be doing to help prevent back pain in their employees, from ensuring their home workstation is set up correctly to providing them with guidance on active working strategies such as getting up from sitting on a regular basis, or advice on simple exercises they can do to prevent back pain and other musculoskeletal problems."