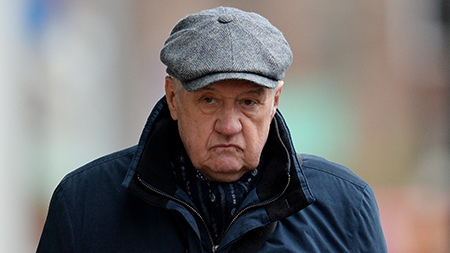 The former South Yorkshire police chief superintendent, 75, was in charge of the FA Cup semi-final in which 96 fans were fatally injured.

Duckenfield was cleared after a seven-week retrial at Preston Crown Court. The jury at the original trial earlier this year failed to agree a verdict.

The prosecution alleged the match commander had a "personal responsibility" for what happened at the match.

The court was told he had ordered the opening of exit gates at the Leppings Lane end of the ground at 14:52 BST on 15 April 1989 -- eight minutes before kick-off, after the area outside the turnstiles became dangerously overcrowded.

More than 2,000 fans then entered through exit gate C, with many heading for the tunnel ahead of them, which led to the central pens of the terrace where the crush happened.

The defence said that Duckenfield, who was brought in as match day commander three weeks before the FA Cup semi-final, should not be judged by 2019 standards of policing at football events.

In June 2018, Judge Sir Peter Openshaw lifted a prosecution ban, known as a "stay", which had been imposed by Mr Justice Hooper in 2000 to prevent further legal proceedings being taken against Duckenfield.

Speaking on behalf of the Crown Prosecution Service (CPS), Sue Hemming, CPS director of legal services, said the verdict did not affect the findings of the Hillsborough inquests, which ruled the victims had been unlawfully killed.

"The disaster at Hillsborough 30 years ago has caused unimaginable suffering to the families of those who sadly lost their lives and to everybody affected by the tragic events of that day," she said. "They were let down with the most catastrophic consequences imaginable. I know how important these proceedings have been to everyone, even though they came far too late.

"The events of 15 April 1989 have been considered on a number of occasions, including at the second inquest concluding in 2016. It is important to remember that criminal proceedings have a very different purpose to an inquest. The not guilty verdict does not affect or alter the inquest jury's findings of unlawful killing or their conclusion that Liverpool fans were in no way responsible for the 96 deaths that resulted.

"It was vitally important that the facts and accounts of what happened leading up to that terrible day were heard in a criminal court and the outcome determined by a jury. This was a complex and harrowing case and presenting evidence about events of 30 years ago has not been straightforward," she added.

Earlier this year, Graham Mackrel, the safety officer in charge of Sheffield Wednesday Football Club at the time of the incident, was fined £6,500 for failing to ensure there were adequate turnstile arrangements in operation to prevent the build-up of large crowds. He is the only person to be convicted of an offence relating to the disaster.