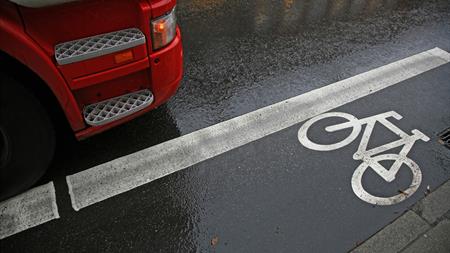 Stephen Moorman admitted causing the death of Ella Murray, 70, by careless driving. The 49-year-old was also ordered to carry out 120 hours of unpaid work.

Buildland, the builders' merchant that employed Moorman, and its managing director pleaded guilty at an earlier hearing to offences under the Health and Safety at Work Act.

Birmingham Crown Court was told that Moorman was using a flatbed Scania HGV lorry with a rear-mounted Hiab crane to deliver and unload building materials across Birmingham on 20 March 2014.

Moorman stowed the crane's supporting legs after completing a delivery but failed to ensure he had properly secured the nearside leg, which rolled out as he drove to the next location in Solihull.

Unaware of the protruding leg, Moorman overtook Murray on Peterbrook Road in Shirley, striking her and knocking her off her bike. He became aware of the detached leg only when it had hit a tree and brought him to a halt.

Police and inspectors from the Health and Safety Executive and the Vehicle and Operator Services Agency visited Buildland's site in Redditch, north-east Worcestershire. They found the company did not have any valid certificates of examinations for their vehicles, several of which had faults.

They said the HGV involved in the accident was not defective, however the crane was found to have several faults.

Its electronics were unreliable and the warning light and buzzer fitted to alert the driver if the supporting legs were not properly secured were not working on the day of the accident, according to local news reports.

Buildland and its director, 53-year-old Rugbir Jutla, pleaded guilty to failing to protect those not in their employment and for failing to carry out risk assessments.

On 13 March 2018 the company was fined £300,000 and Jutla was jailed for 21 months. Both were ordered to pay £25,687 costs. According to a document filed at Companies House yesterday (2 July), Jutla has been removed as Buildland's director.

Neil Fielding, specialist prosecutor with the West Midlands Crown Prosecution Service complex casework unit, said: "Rugbir Jutla and his company owed a duty of care to their employees and members of the public. They failed to meet this requirement and allowed vehicles, which had not been examined for their safety, on to a public highway.

"Stephen Moorman was the driver of one of these vehicles. He failed to follow the right procedure when stowing the crane away."