Here’s one I prepared earlier 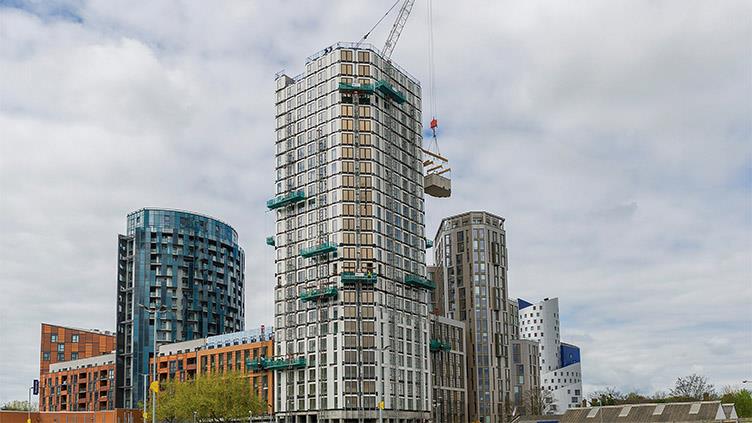 In a sector under pressure to modernise, innovate and find more sustainable ways of working, modular construction has become a hot topic. From the Farmer review of the UK's construction labour market (see "Modernise or die" box below) to the British government's recent housing white paper, modular methods -- and offsite manufacturing more broadly -- feature as, if not a magic bullet, then at least part of the answer to the challenges facing the nation's building industry.

Offsite construction blurs the lines between manufacturing, engineering and building, and most of the focus has been on its speed, efficiency and cost benefits. But shifting work away from the traditional site into a more easily controlled manufacturing environment, where fatal and major injury rates are lower, also has potential safety and health implications.

Modular systems reduce the number of workers and trades required at a construction site and the time they spend there, as well as cutting plant movements and deliveries.

All these factors intuitively point to safer working in an industry that historically has had a poor safety record and high levels of ill health. Most of the evidence, however, is anecdotal. There is little recent research by the industry or the Health and Safety Executive (HSE) and no up-to-date statistics on accidents and ill health specifically in the UK offsite sector. A US report from McGraw Hill Construction in 2011 found that 58% of current modular users in the US cited increased project safety as a key factor driving them to use modular construction, while 49% of non-users indicated they would probably turn to this method because of safer construction. Four-fifths (78%) of general contractors identified "complex assembly done at ground level/offsite" as a feature of modularisation or prefabrication that contributed to safety, while 69% identified fewer workers onsite and 58% mentioned the reduced need to work from height.

The Construction Industry Training Board (CITB) recently published a review of the workforce skills needed for offsite construction (bit.ly/2eSg1G6). The paper mapped requirements across six functions, from digital design to operative factory work and onsite assembly. 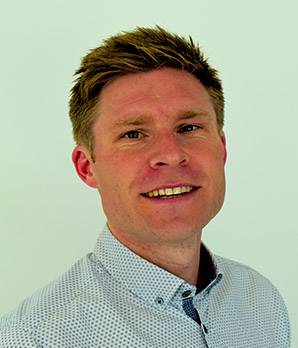 "The onsite element of the installation depends on the level of pre-manufacture," notes Ben Lever, CITB's future skills manager. "It might be quite basic: a timber frame, for example. It might have insulation but all the utilities and connections still need to be done on site. Or it might be volumetric modular production where almost everything is finished offsite, and it's probably that area that has most potential impact on the health and safety side."

Figures from Buildoffsite, which promotes greater uptake of modular techniques, suggest the total reduction in site hours worked could lie between 60% and 80%. It concludes that this "could be expected to produce a pro-rata reduction in the occurrences of major injury and death" compared with conventional construction. This assumes that the level of risk does not increase during assembly and installation (or that new risks are not introduced), and that risks are not somehow transferred to the factory or to the movement between factory and site.

Lever notes that one of the priorities in the HSE's draft sector plan for construction is to reduce the incidence of ill health, particularly occupational lung disease and musculoskeletal disorders (MSDs). With production in a more controlled factory environment, much of the dust normally generated on site can be eliminated or controlled.

"In a traditional build, people would be putting up blocks, drilling blocks and creating dust," he says. "As for MSDs, modular construction significantly reduces onsite manual handling of materials such as bricks, blocks and plasterboard."

With much of the production offsite, onsite workers tend to do less manual handling and repetitive tasks and are mainly left with highly-mechanised heavy lifts. 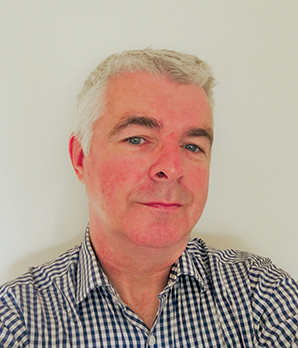 Conor Quirke, health and safety adviser at London-based Tide Construction, agrees there is "very little lifting" on the manual side; everything is already done once the modules are complete and landed in. "All the onsite guys have to do is unhook the lifting frame and weld the modules together."

With its associate company, Vision Modular Systems, Tide is currently building student accommodation at Apex House in Wembley, which at 28 storeys will be the tallest modular building in Europe and the second tallest in the world (see main picture above). Vision made its 679 volumetric modules in a controlled assembly line at ground level where all internal finishes, mechanical and electrical installations, windows, external insulation and some external finishes are applied.

Quirke believes many of the benefits of the modular approach lie in improved onsite health: reductions in manual handling, noise, dust and vibration.

"There is noise from the cranes or from generators," he says. "But there is very little from concrete mixers and other plant, so overall noise levels are far lower than on traditional sites." There are also fewer wet trades, such as concrete pouring, plastering, painting and decorating required onsite. One area where there might be an increase is hot work, he notes. "But welders are highly trained and are working on a permit system too, so this is very controlled."

We're working with cranes and sometimes close to live traffic; there are a lot of heavy lifts going on

The significant reduction in deliveries means fewer traffic movements, cutting the risk of people being struck by lorries and producing less noise and dust.

"We are mainly operating in London and all the sites are located in densely-populated areas; there are no lay-down areas and it can be very tricky to manoeuvre," Quirke adds. 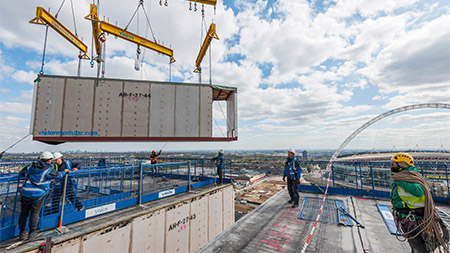 The advantages of reducing the volume of people on site are augmented by fast project turnaround times epitomised by a student block Tide Construction and Vision Modular recently completed in Lewisham, south-east London.

"Our construction programmes have tight schedules," says Quirke. "It was just 11 months from planning to handover. We worked 212,000 hours on that job and had zero accidents. The average number of workers per week topped off at about 160, which is significantly less than you would have on a traditional site of that scale."

Other case studies cited by Buildoffsite reflect the experiences of both Tide and Vision. There were no reportable incidents in 120,000 working hours worked to construct the three-storey 4,840 sq m Emersons Green NHS Treatment Centre in Bristol, largely prefabricated by Portakabin subsidiary Yorkon. On the 2011 build for HM Prison Oakwood in the West Midlands -- the UK's first modular prison, which holds up to 1,600 inmates -- Kier recorded only three reportable incidents in more than 2.7 million hours worked.

Confined space work is also reduced. "Most of what would be confined space work on site is done in the factory before the modules are closed up," Quirke says. In student accommodation, modules come with beds installed, floors finished, windows in and walls painted. "On site, they might have to do a second coat or touching up," he says. "But once the module is finished, the door is closed and onsite staff can't get in until snagging. All connections for M&E and services are done to risers, which are then connected as you go up the floors, so there is no need for anyone to go in and out of the modules."

Though some traditional safety and health risks are vastly reduced or even eliminated on site, parts of the modular approach can create additional hazards. "Something we identified is more work involving cranes, lifting, slinging and signalling," says CITB's Lever. "There are much bigger loads and much bigger panels. So there is certainly potential, if you don't watch what you are doing, for things to go wrong, particularly in adverse weather. You've got to have appropriate training and understand the risk factors for bigger lifts. This element, above any other, is where enhanced training and knowledge is needed to ensure you are mitigating those risks."

Quirke agrees: "We're working with cranes and sometimes close to live traffic; there are a lot of heavy lifts going on." Referring to Tide and Vision's system to shift the units, which can weigh up to 30 tonnes, he adds: "We have designed a specialist lifting frame that's adapted to use on any shape of module."

Primarily, the success of the lifting techniques depends on good engineering at the beginning. "Exactly where the lifting points go on the modules is all done in pre-planning, and is tried and tested. We've lifted thousands of modules incident-free and we're doing big lifts in tight spaces. One project we were involved in was to install a marketing suite in one of the annexes at Battersea Power Station, which involved a particularly large and heavy lift. It was a challenge, but we got it done effectively and safely."

He adds that easier and safer maintenance can be planned into the design: "For example, every room in Apex House has two anchor points on the floor for workers to clip a harness into if they need to remove a glazing panel. We have future-proofed our buildings to design out the risk of falling from a height."

The success of Tide's methods depends on strong contractor relationships and Quirke is encouraged by progress.

"Since we started out, we've developed lasting partnerships that mean everyone is familiar with our system," he says. "We have good working relationships across the M&E sector, the concrete trade, and the cladding trade. We rely on these professional partnerships to achieve excellent build quality, as more of us gain experience working together with the same system."

Another of the HSE's sector plan priorities is to embed the principles of the Construction (Design and Management) Regulations 2015 (CDM). Lever points out that the regulations prioritise the need to design out risk early and expect the parties to communicate over safety and health.

"The point about offsite is that it's much more of a planned process," he says. "So, CDM is perhaps more embedded by default. With offsite methods, things are much more predictable, especially when combined with building information modelling. If whatever you create can be manufactured efficiently in a factory and transposed on site, that's the whole ethos of CDM -- planning right at the start of the design stage. It's part of a matter of course to include risk and design it out. If the project is more tightly controlled and all the elements are less unpredictable, some of the stress and anxiety goes away, which also contributes to overall wellbeing."

Not that the process is entirely stress-free. "Reduced construction programmes are a key benefit of a modular system," Quirke says. "Early return on investment is important for our clients. For the most part it is doable but can bring extra headaches and depends on project management staff on site to get things done."

This time pressure has the potential to be a stressor. But so far there have been no studies on this and, in Quirke's experience, no one has complained on site. "It's down to good management ultimately," he suggests. "It could add extra pressure, but if we're engaged and planning properly, we're in a good position to shorten times without undue stress."

Modular construction seems likely to become a growing segment of the UK construction industry in the next ten years. And the signs are that it can improve safety and health and working conditions, which is crucial for an industry looking to improve its reputation and attract new talent. What is currently missing is any in-depth research or analysis of the benefits in practice, something the industry and regulators could start to address.