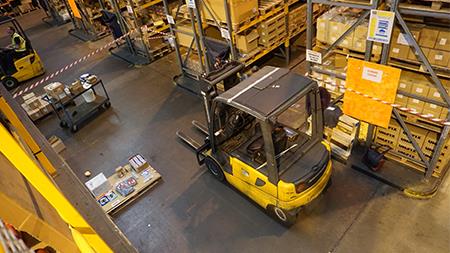 Team leader Debra Thorpe required 13 operations on her leg after being hit by the vehicle at the Owlett-Jaton warehouse on the Stone Business Park in Opal Way, Stone, Staffordshire on 28 September 2016.

The court was told that Thorpe was returning on foot from the toilets on the warehouse's ground floor to the mezzanine where she worked when the accident happened. She was airlifted to hospital where she spent four weeks recovering. She required a metal plate in her leg and skin grafts. She also received therapy for post-traumatic stress disorder, Newcastle Under Lyme Magistrates' Court was told.

An investigation by Stafford Borough Council found that the company had failed properly to assess the risks posed by forklift truck movements in areas where pedestrians were likely to be.

Christian Du Cann, defending the company, said that Hexstone had pleaded guilty at the first opportunity and had co-operated fully with the investigation. He told the court that following a 2005 inspection, the company had been "commended" for its safe system of work. Du Cann added: "There was a system but it was not rigorous enough."

The supplier was fined £300,000 and ordered to pay £7,424 in costs. The court was told that since the incident, the firm had painted dedicated walkways on the warehouse floor; installed a new crossing; introduced a "caution" tape barrier system; and reorganised the shelving to provide better visibility.

The court was told that Thorpe had remained on full pay since the accident and the company would be arranging a phased return to work for her.

District Judge McGarva said the supplier had not been cavalier in its approach and had since taken steps to remedy deficiencies uncovered by the council's investigation.

"The measures required are recognised standards in the industry. They failed to put in place those recognised measures," the district judge said.