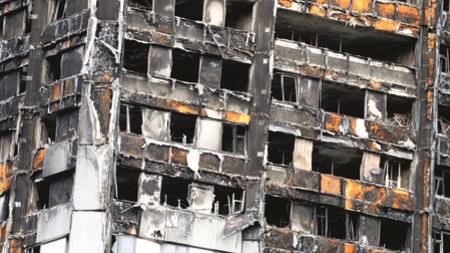 Dame Judith Hackitt's Independent Review of Building Regulations and Fire Safety, commissioned by the government after the Grenfell Tower fire last June that killed 71 residents of a west London local authority high-rise block, found that a lack of clarity on roles and responsibilities and inadequate regulatory oversight and enforcement has led to a "race to the bottom" in building safety practices.

Hackitt said: "This is a systemic problem. The current system is far too complex, it lacks clarity as to who is responsible for what [-¦] Simply adding more prescription or making amendments to the current system, such as restricting or prohibiting certain practices, will not address the root causes.

"The recommendations in this report will lead to a clearer, simpler but more robust approach to the building and ongoing management of high-rise residential buildings."

However the report has drawn widespread criticism from MPs and campaigning groups for failing to recommend a ban on combustible cladding on high-rise buildings.

Building on her interim report, which concluded that the current fire safety regime covering high-risk buildings was not fit for purpose, Hackitt has recommended a new, "simple" model based on risk ownership where clients, designers, contractors and owners have clear responsibilities for the construction and maintenance of high-rise tower blocks of ten or more storeys -- referred to in the report as "high-risk residential buildings" (HRRBs).

This means the construction industry would be responsible for the delivery of safe buildings, rather than looking to others to tell them what is or is not acceptable.

The report has called on the government to create a new joint competent authority (JCA) that would oversee "better management of safety risks" within HRRBs.

Hackitt insists there would be "no need" to create a new regulator to deliver her proposed new regime, but explains "there is a need for existing regulators to come together and bring their collective expertise and knowledge to bear in a very different way".

The JCA would be made up of Local Authority Building Standards (the proposed new name of the Local Authority Building Control, see below), fire and rescue authorities and the Health and Safety Executive, of which Hackitt is the former chair. It should operate on a full cost recovery basis, the report recommends, which means all key engagements between dutyholders and the new authority would be fully chargeable.

It goes on to list several responsibilities that should fall within the JCA's remit, including ensuring dutyholders reduce or mitigate building safety risks during the design and construction and occupation and maintenance phases.

To ensure deliberate corner-cutting is identified and addressed during construction and occupation of HRRBs, Hackitt recommends that senior dutyholders inform the JCA of incidents and near misses under a "mandatory occurrence reporting" model on a no-blame basis.

"It is very important to ensure that there is a mandatory occurrence reporting route to the JCA for all key dutyholders," the report says. "This will be another essential way to hold those involved in creating a HRRB to account." Non-reporting should be considered a non-compliance "and sanctions applied appropriately".

Other recommendations for the new regulatory framework include:

Elsewhere the review suggests that during the procurement process for HRRBs, principal contractors and clients should draw up contracts that state cost reduction will not affect safety requirements. It also recommends the government considers applying this requirement to other multi-occupancy residential buildings.

On reforming building standards, the review says: "It is important that regulatory oversight of these buildings is done in a manner which is completely independent of clients, designers and contractors and that enforcement can and does take place where that is necessary. The ability for dutyholders to choose their own regulator must stop and regulators must be able to enforce as regulators."

The report recommends re-naming the Local Authority Building Control, the professional body covering building control teams working in local authorities in England and Wales, as the "Local Authority Building Standards". It says this newly rebranded body should be given additional powers to issue enforcement notices to dutyholders and require changes to work that fails to meet the Building Regulations. It also recommends that time limits for bringing prosecutions against dutyholders should be increased to "five or six years for major deficiencies in building requirements".

Hackitt told a press briefing on the report that constructions contractors should face jail or unlimited fines if they breached fire regulations.

On the testing regime for cladding, Hackitt recommends the establishment and certification of more test houses, which should produce an annual report including details of tests carried out and the number of passes and failures reported.

In addition, " a simpler, more streamlined set of standards relating to the testing of products used in HRRBs needs to be developed" and "test methods and standards should be maintained under a periodic review process in order to drive continuous improvement through the development of new test methods", the review says.

Hackitt has failed to recommend a ban on controversial "desktop studies", which allow untested materials to be used without setting them on fire. The government is currently consulting on restricting or banning the use of assessments in lieu of tests as a way of measuring the fire performance of external cladding systems.

Though the final report sets out more than 50 recommendations for government for a more robust regulatory system, it does not call for an explicit prohibition on combustible cladding and insulation similar to that which appeared to spread fire on Grenfell Tower almost a year ago.

Hackitt's decision to instead overhaul regulations and introduce tougher sanctions to deter non-compliance was met with anger by architects, building firms, politicians and survivors of the blaze, who had been campaigning for a ban on construction materials that burn.

She told BBC Radio 4's Today programme: "It is about more than simply issuing a ban on certain materials. Cladding is one issue; there are many other features and many other shortcuts out there that could result in other disasters in the future which we need to address as part of this. It needs a whole system change."

Responding to the findings of the final review, IOSH's head of policy and public affairs Richard Jones said: "While much is being made of there being no outright ban on combustible cladding, we are satisfied that, if all of the measures are introduced as intended, this review covers that issue more than adequately."

However after widespread outcry over this decision, Prime Minister Theresa May, who recently agreed to spend an estimated £400m to remove and replace unsafe Grenfell-style cladding from council and housing association tower blocks, said the that the government would be willing to prohibit flammable cladding.

She told MPs: "We are minded to go further by banning combustible materials in cladding on high-rise buildings. We are meeting our legal duty to consult on these proposals, and we will not delay any necessary action."

Housing secretary James Brokenshire announced a consultation on outlawing the use combustible cladding on high-rise tower blocks shortly after the final review was published.

Hackitt said: "The ultimate test of this new framework will be the rebuilding of public confidence in the system. The people who matter most in all of this are the residents of these buildings. The new framework needs to be much more transparent."

Richard Jones added: "The Hackitt Review has delivered some good recommendations that answer a lot of what IOSH and others have called for. We sought clearer relevant regulation, guidance and enforcement and, recognising our risk-based system, improved fire-safety competence for all involved.

"It is also crucial there are clear roles and responsibilities for competent organisations and individuals. We are pleased this is accounted for in the review.

"It is now up to the government to act on these as we seek to ensure we never have another tragic fire like Grenfell Tower. We urge the government to develop an implementation plan as soon as possible. This must be made publicly available and regular updates should be provided.

"The development of a single enforcement agency, as mentioned in the review, should be part of this. The importance of effective enforcement cannot be overstated. It will drive up standards, naming persons responsible so they understand that they are accountable.

"The review's recommendation of a new regulatory framework proposes stronger oversight of dutyholders so they're clear about, and they meet, required standards. If this does not happen, sanctions should be imposed, but in the [final review] there is no indication as to what these may be. We suggest [-¦] they could be linked to the health and safety offences, corporate manslaughter and food safety and hygiene offences sentencing guidelines.

"What we now need to see is a culture change. We still have the issue of pressure being put on designers and contractors to deliver in unrealistic timeframes, leading to cost- and corner-cutting.

"Fire safety must be 'designed-in' from the outset in all construction projects. This good practice will reduce costs further down the line. It is down to the government to effectively implement these recommendations. Lives are at stake."

The government has already invited views on how it could reform the building regulations, it said.