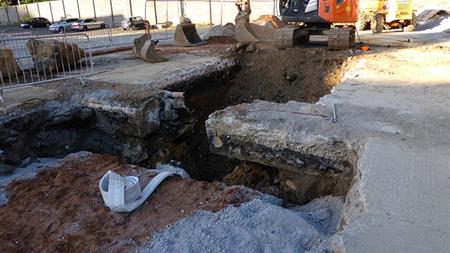 The 48-year-old employee was working in a 2 m deep excavation and sustained life-threatening injuries, including fractures to his skull, ribs, left arm and vertebrae.

The Health and Safety Executive (HSE) found that Rotherham-based construction engineers KDS Construction had been contracted by Abbey Forged Products to carry out groundworks for the new drainage system at its Beeley Wood Works site in Sheffield in September 2016.

KDS Construction employees had dug several excavations for the new tanks and pipework when the incident happened. After installing the attenuation tank they started excavating the ground beside it for an interceptor tank.

While the second excavation was underway, one of the groundworkers was asked to cover protruding pipework from the attenuation tank so it would not be damaged by backfill. While he was in the hole a section of overhanging unsupported concrete broke off the ring beam separating the two excavations and fell onto him. He was struck on the head and pinned down.

KDS Construction pleaded guilty to breaching s 2(1) of the Health and Safety at Work Act at Sheffield Magistrates' Court on 4 April. The firm had to pay £70,000 plus £4,016 in costs.