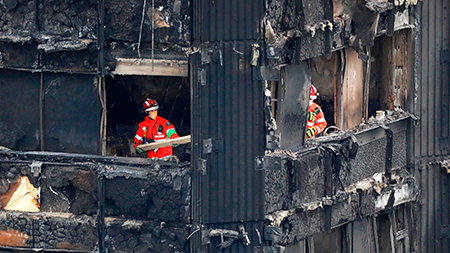 Inquiry chair Sir Martin Moore-Bick has made detailed recommendations for better training for fire services and new duties on high-rise building owners in his report into the fire that broke out in the 24-storey local authority-owned block of flats in West London in the early hours of 14 June 2017 and consumed the block, resulting in 72 deaths.

The report marks the end of the inquiry's first phase, which investigated the cause of the fire, its spread and the response of the London Fire Brigade (LFB) and the other emergency services. It took evidence from survivors, members of the emergency services and experts in fire safety.

It confirms that the main reason a small domestic fire caused by a faulty fridge-freezer spread to the building's exterior and then over the whole block was the addition during a 2016 renovation of aluminium composite rainscreen panels to the four faces of the building. These panels had polyethylene cores, exposed in places, which fuelled the fire and ignited other fires on the facade via burning drips. The relocation of the apartment windows to the outside of the window reveals that, flush with the cladding and without installing a non-combustible layer, compromised the building's fire compartmentation system designed to keep a conflagration from spreading.

The report criticises the LFB's preparation and planning for a fire like that at Grenfell Tower as "gravely inadequate". Retired judge Moore-Bick praised the courage and devotion to duty of the firefighters who attended the blaze but said the first incident commanders "were faced with a situation for which they had not been properly prepared". They had no training in the hazards posed by combustible cladding or in how to recognise the need for an evacuation. They failed to abandon the 'stay-put' policy -- in which residents were advised to stay in their flats rather than escape -- for an hour after it was clear that all fire compartmentation in the block had failed.

IOSH believes that progress has been far too slow, and must be accelerated, properly resourced and afforded the priority it merits to prevent further deaths

"There were serious deficiencies in command and control," says the report. "Although additional resources arrived swiftly, some senior officers failed to give sufficient practical support or inform themselves quickly enough of conditions and operations within the building."

There was no contingency plan for the evacuation of Grenfell Tower in the LFB's operational risk database for buildings and what information there was on the tower was either wrong or out of date because it did not account for the refurbishment. The report recommends new legal duties on owners and managers of high-rise residential buildings to inform their local fire and rescue services about the design and construction of external walls and about any material changes made to them, to provide fire services with up-to-date building plans, to draw up and test evacuation plans and to test monthly any lift systems designed for use by firefighters and report test results to the fire service. They should also be obliged to issue all residents of their buildings with easy-to-understand fire safety instructions.

The report also recommends all high-rise residences be fitted with alarm systems that allow the emergency services to issue an evacuation warning to all or part of the building. Building owners should conduct three-monthly inspections of fire doors to check their self-closing mechanisms are in good order -- some at Grenfell had failed, compromising fire compartmentation. 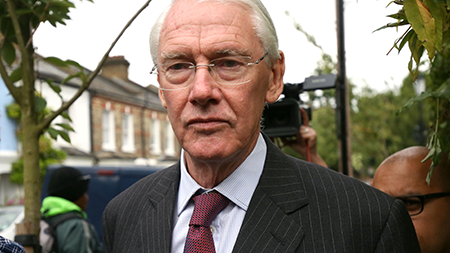 Moore-Bick dedicates a chapter of the report to the 2009 Lakanal House fire in south London in which six people died in a 14-storey block of local authority flats. The coroner's recommendations after that fire led to an internal review by the LFB of its protocols for handling 999 emergency calls and the situations in which it was appropriate for call handlers to advise residents to stay put or leave their flats. "Despite changes in policy, similar shortcomings were displayed by the control room when responding to callers from Grenfell Tower," says the report.

Communication and coordination of the fire and police services was inadequate, says Moore-Bick. "That in turn led to a lack of shared understanding of the nature and effect of the fire."

"LFB needs resourcing to urgently address issues with command and control, training, equipment and communications," said IOSH's head of policy and regulatory engagement, Richard Jones, adding that "these lessons should be considered by all fire and rescue services across the country".

Turning to the conditions that allowed the fire to spread in the first place, the report finds that the external walls, once fitted with the rainscreen cladding, failed to comply with requirement B4(1) of Schedule 1 to the Building Regulations 2010, that they should "adequately resist the spread of fire over the walls".

"On the contrary," said Moore-Bick, "they actively promoted it." The second phase of the report will try to determine who was responsible for this failure. It will also investigate whether the testing and certification regimes for materials used on high-rise buildings are adequate and whether sprinkler systems should be fitted to high-rise residential stock. The hearings for phase 2 will open in January and a second report is expected in 24 months' time.

Police investigations into the organisations responsible for the building's management and refurbishment are ongoing. In December 2018 the government announced a set of new requirements to improve safety in residential high-rises in response to a separate inquiry led by former Health and Safety Executive chair Dame Judith Hackitt into building regulations.

Hackitt's recommendations included higher penalties for fire safety breaches and obliging new high-rise residential projects to pass through a series of 'gateways', points at which the regulators will approve fire safety arrangements.

This week Hackitt was appointed by the Ministry of Housing, Communities and Local Government to oversee the creation of a new building safety regulator, which was another of her report's recommendations.

Jones welcomed this development and the Moore-Bick inquiry's report but expressed concern about the delays in removing combustible cladding from around 430 blocks in the UK.

"IOSH believes that progress has been far too slow," he said, "and must be accelerated, properly resourced and afforded the priority it merits to prevent further deaths."