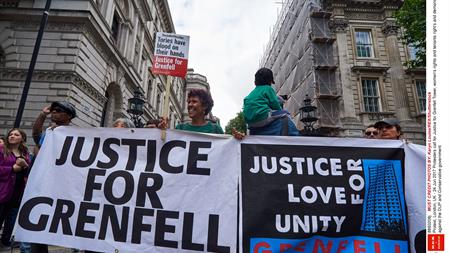 In a letter sent to survivors yesterday (27 July), the Metropolitan Police said it has "seized a huge amount of material and taken a large number of witness statements" during its investigation.

Both the council and the TMO that managed the tower block have now been informed they may be charged for their involvement in the blaze, which killed at least 80 people when it ripped through the 24-storey building of 14 June.

It continued: "In due course, a senior representative of each corporation will be formally interviewed by police in relation to the potential offence. This interview will not take place immediately, since it is important that all relevant facts and information have been gathered before any such interview is conducted.

"These facts are simply an update on the investigation so far. The content of this note should not be taken to conclude that the identified offences and organisations are the only offences, organisations and individuals that are being investigated."

The leader of Kensington and Chelsea Council, Elizabeth Campbell, who took over from Nicholas Paget-Brown who resigned over criticism of how the council responded to the tragedy, said: "Our residents deserve answers about the Grenfell Tower fire and the police investigation will provide these. We fully support the Metropolitan Police investigation and we will cooperate in every way we can."

The Justice 4 Grenfell campaign group said in a statement that it welcomed the news, but it needed to go further: "J4G welcomes the police statement that they have enough evidence to proceed with corporate manslaughter charges [-¦] It will go some way towards the rebuilding of trust.

"However, corporate entities don't make and enact policies, people do and for that reason J4G wants to see individuals named, charged and put on trial in addition to the corporate manslaughter charges. It's not a case of either one or the other for justice to be done and to be seen as done; we want both."