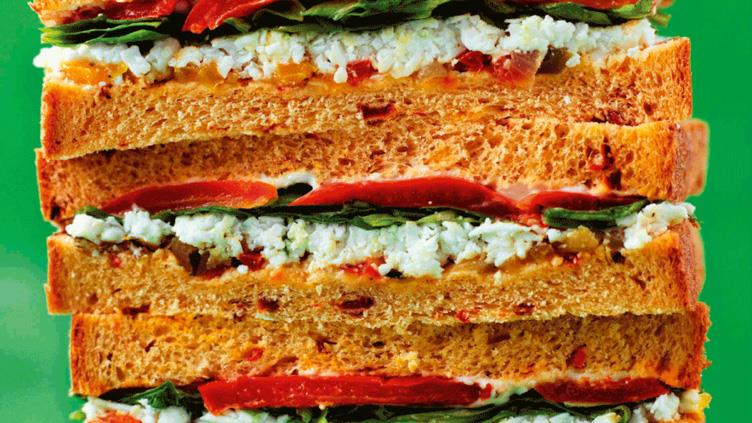 I am watching two workers assemble small cardboard cartons, take filled triangular sandwich packets (bacon, lettuce and tomato) from a conveyor six at a time, fill the cartons and place them on a lower conveyor over and over. It would be an exaggeration to say their hands are a blur, but they are moving very fast, completing the whole carton assembly and filling process in around five seconds. But the packers don't look stressed, and since they are stood less than a metre apart on either side of the conveyor, are even chatting while they perform what looks to this untrained observer almost like sleight of hand.

It wouldn't have been like this two years ago. Then, the despatch section at Greencore Foods' Park Royal plant would have involved staff rushing to pick sandwich cartons which came off the end of the production line onto a low "lazy susan" rotating table, twisting through almost 180 degrees and then bending again to pack them on a thigh height table. There were also a third more staff crowding the section.

The 3000 square metre purpose built Park Royal plant makes sandwiches and wraps for supermarkets and convenience stores. The factory is divided into high care and low care zones; the former where the sandwiches are assembled and hygiene is at a premium and the latter -- the despatch area, where products are already sealed and no risk of contamination.

The plant operates 10 production lines with 25 people per line of which, in 2013 six were in the despatch team at any time, inspecting the wrapped sandwiches for quality, putting them in cartons and stacking them on pallets or in roll cages.

The increased throughput and meant speeding up the lines and led to a spike in complaints of back pain and ill health absence in the despatch area.

"The musculoskeletal issues were that people then were twisting more and you'd get repetitive strain injuries as well," explains site health and safety manager Gary Love, Affiliate IOSH. "People can do some things at a leisurely pace that when you ask them to do more and quicker cause wear and tear." 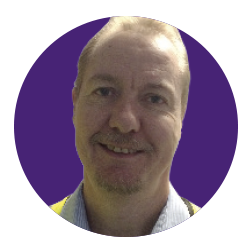 "You were bending, chasing the product round a moving table then lifting it to a higher table, so the movement of your body was huge," adds Tony Dalmedo, who manages the low care section.

At least one person a week would be off with some sort of complaint. And we haven't had anyone off [with MSDs] since the new lines came in

Employees were rotated every two hours through the different despatch tasks packing, loading and film wrapping the full pallets for stability. But the frequency with which they returned to the main inspection and packing job with all its twisting and bending meant the complaints grew.

It was easier to accommodate the extra production demands in the earlier part of the line where the sandwiches are made," says Love, "because you can put more people closer together and ramp it up that way."

But despatch was limited by space constrictions. The lines end about three metres from the factory's back wall which backs on to the Paddington arm of the Grand Union Canal, leaving no room for extension.

This congestion pushed up the accident rate too as despatch staff backing onto the route used to move the roll cages and pallets along the back wall to the loading bay were routinely knocked by the pallet trucks and cages.

The Waitrose contract also introduced cardboard sandwich packets into the despatch area alongside the previous plastic skillet packs. As the despatch teams struggled to keep up with the increased throughput, more of these cardboard packs were dropped or damaged, pushing up waste levels. 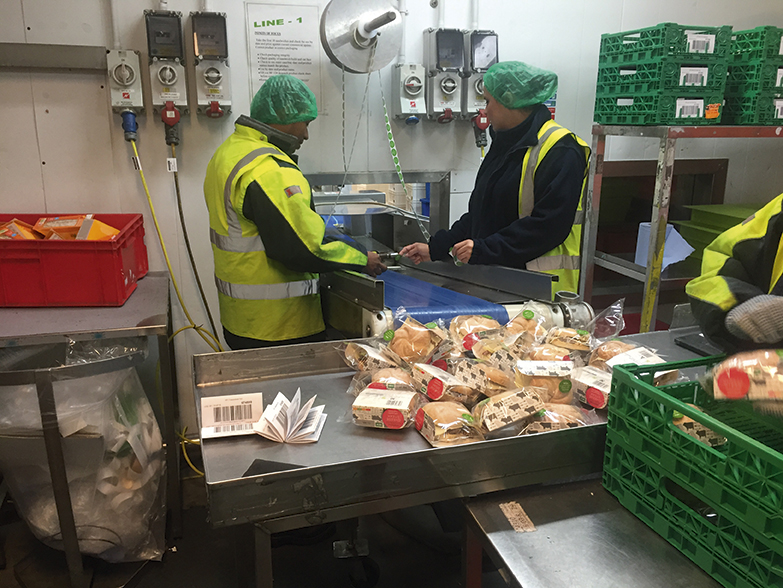 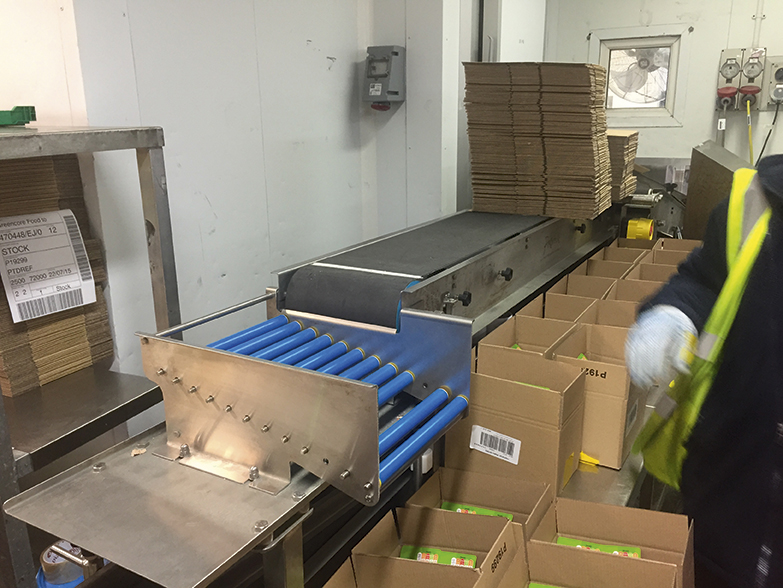 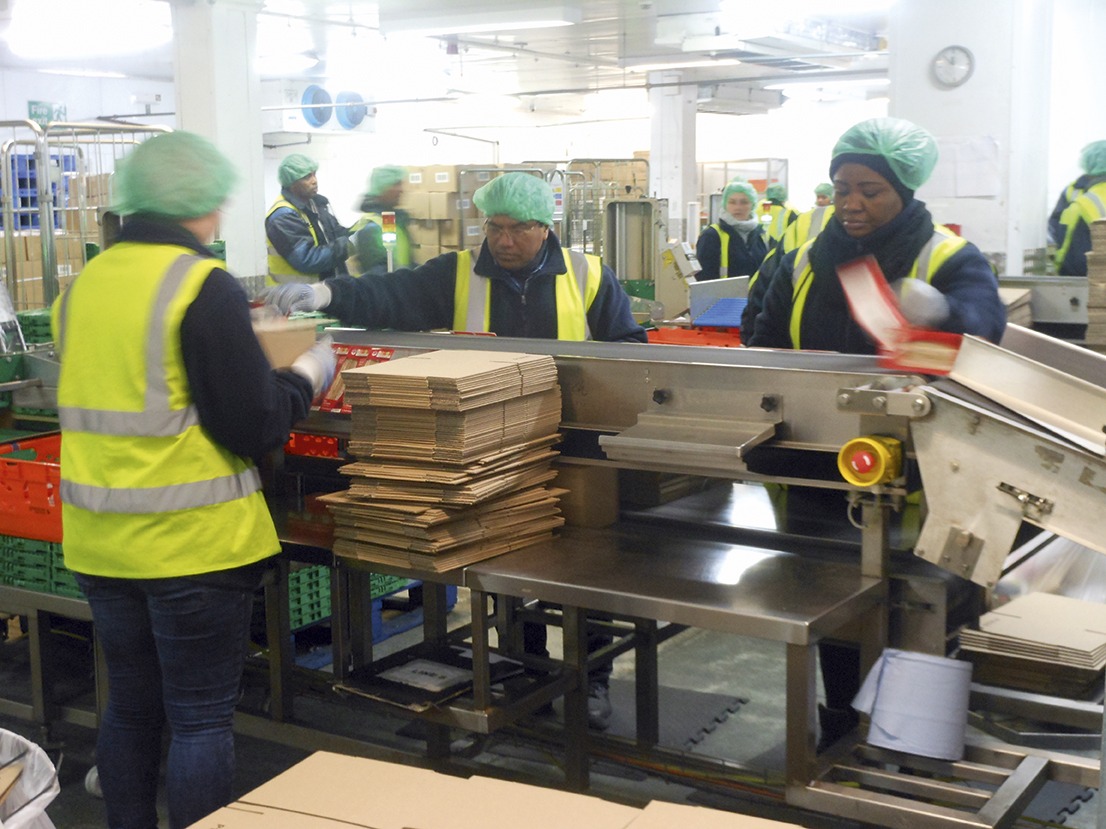 Dalmedo formed a project group to work on redesigning the line in August 2013, made up of himself, despatch manager Nicole Robinson, Matt Pedley, Love's predecessor as health and safety manager, a plant engineer and three of the despatch workers. He found a local engineering company Protech Fabrications who were willing to help manufacture a new despatch line, one of whose engineers then joined the working party for weekly meetings.

The first result of the group's work was a switch away from the low lazy susan revolves to a waist height static table at the end of the conveyor where operators could pick the sandwiches. Though the table reduced the bending and chasing moving product, its location at a right angle to the line still required despatchers to overstretch into the corners and to twist to pack the packs in larger boxes.

This first modification was trialled from September 2013 until March 2014. But during this period the group continued to meet and was already working on a more radical line variant, which necessitated a new machine designed by Protech, which arrived in the Spring.

This conveyor unit (see picture) was a completely new design that consisted of two stacked conveyor belts. The upper one brought the sandwich cartons through from the high care zone at lower chest height, while the lower one carried cartons of four or six packs through a sealing machine and into a stock cage. Operators now stood on either side of the machine facing the conveyors. They picked sandwiches from the top belt, packed them into cartons and placed the cartons on the lower belt.

The new machine was welcomed with reservations, says Dalmedo: "The operators in the group said 'we don't like the height, we don't like that we can't change the speed'. But what they did like was that they could see their colleagues and they didn't have
to bend." 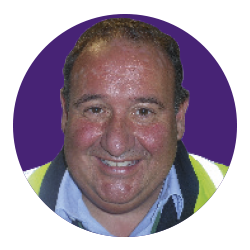 The delivery of the sandwiches in a line at a comfortable height also sped up the inspection part of the job -- checking the sandwiches are cut and packed correctly through the packet windows.

From the moment it was installed, the engineers started adapting the new machine to better suit the operators. "We were moving buttons on it, the designers were in every week," Dalmedo says. We kept it going to see the teething problems."

This led to the second version in January 2014, including all the refinements and critically from a postural viewpoint, raising the lower carton conveyor. This meant stock would just fit in the space below the upper belt but was within the operator's standing reach, stopping all unnecessary bending. New holding brackets were fitted to the machine's sides so despatchers could hold stock boxes close and all emergency stops were raised so they also were at arm's length.

The revised conveyor was an immediate success and Dalmedo was able to demonstrate it generated a fast return on investment that won him funding to commission new machines for the nine remaining production lines, the last of which was installed in
July 2015.

The major saving is that combining the carton assembly and packing task and the reduced packer effort from chasing packets on the lazy susans has allowed the plant to cut the number in each despatch team from six to four, allowing redeployment of two staff elsewhere on the line, which has allowed the plant to cut its use of agency labour. This had the effect of raising productivity per employee in the despatch lines from 2000 to 4500 units per shift.

Return on investment on the £15,000 despatch lines is measured not just in the agency saving, but better quality control and reduced absence and Dalmedo estimates a line pays for itself in 12 months. "At least one person a week would be off with some sort of complaint; that's an £8 an hour role at 40 hours a week," he says. "And we haven't had anyone off [with MSDs] since the new lines came in."

The reduced congestion in the despatch area - "It's still busy, don't get me wrong," says Love, "but it's more organised" - also helped cut reportable accidents by 50% between 2013-14 and 2014-15, and reduced the accident frequency rate by 10%. (Other safety investments contributed to the improvement. Installing underfloor heating in the blast freezers cut ice build up which was causing slips, for example.)

Another benefit comes from the alleviation of what Dalmedo admits can be boring work. 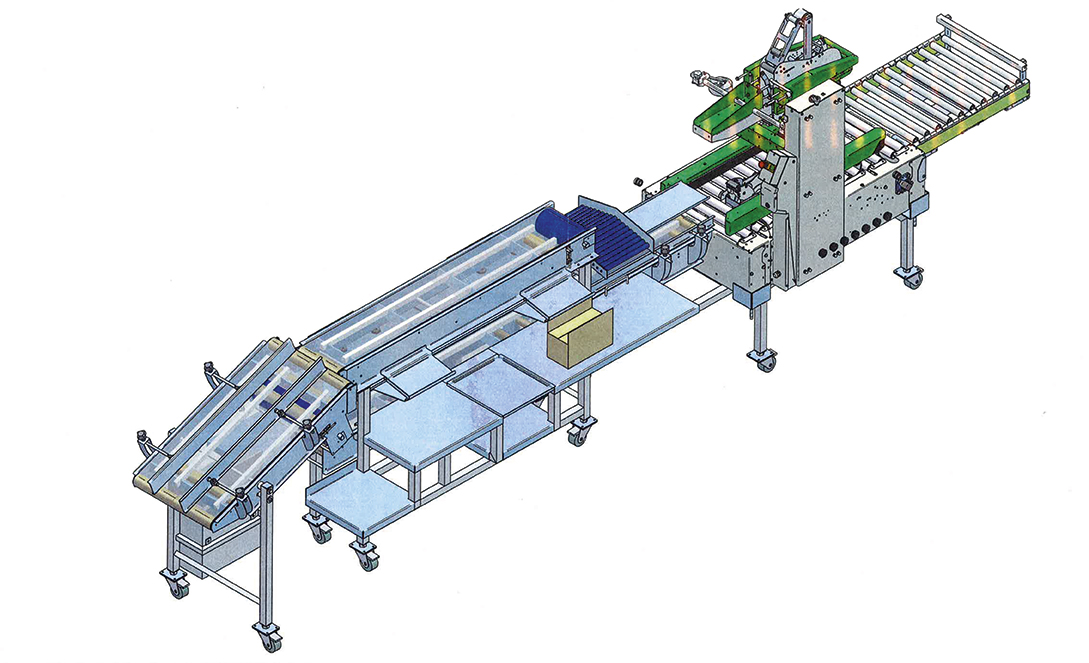 "It's brought a definite uplift in staff morale," says Love. "Before they were bent around a table and now they are standing straight with a colleague opposite them, they can do the job while still seeing that person on the other side. They can talk about they did last night or whatever."

Despatch manager Nicole Robinson is most enthusiastic about the new line. "It's like having a Mercedes after a Ford," she says. 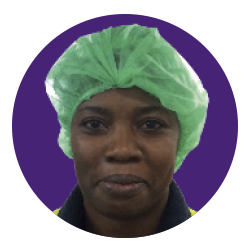 All of these success measures led to the Park Royal team being awarded top prize at the IOSH Food and Drink Awards last October.

For Dalmedo, the biggest contributor to a successful replacement for the old line was the staff involvement. "The main element of getting this correct was getting three operators off the line and saying 'what do you want?'" he says. "You must consult your team. Obviously you've got to take responsibility for that decision but without their input that decision is going to be flawed."

Having visited Park Royal to see the despatch line in action, two other Greencore plants, Bow in east London and Manton Wood in Worksop, have raised capital funding for the current financial year to fit the new conveyors. Other sites have also expressed an interest.

"I say to them all, 'you must remember this fits this site, it might not fit your site'," says Dalmedo. "'You might want to tweak it, but get the staff involved and get them to tell you what they need; win them over'."