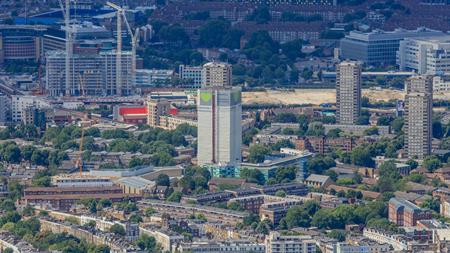 In response to a consultation into banning the use of combustible materials in cladding systems, like that which contributed to the rapid spread of fire that killed 71 of the high-rise block's residents last June, the EHRC said it was concerned about their continued use on existing buildings.

It has written to the government department for housing, communities and local government -- the Ministry of Housing, Communities and Local Government -- highlighting its fears over the safety of Grenfell-style cladding. The commission also reminded the department of its responsibilities under human rights laws to protect lives, but has not yet received a response.

Dame Judith Hackitt was met with an outcry in May when her final report into the independent review of the fire safety and building regulations after the Grenfell Tower disaster failed to call for an explicit prohibition on combustible cladding.

On 18 June housing secretary James Brokenshire published the consultation on proposals to revise the building regulations to ban the use of combustible materials in the inner leaf, insulation and cladding that are used on the external walls of high-rise residential buildings.

The EHRC submitted its response earlier this month, in which it said: "Combustible cladding materials should be banned by taking legislative action, such as amending the building regulations, as the government has proposed in this consultation.

"We welcome the clarity and additional public confidence this will bring in terms of the safety of future construction, but much more needs to be done to prevent another Grenfell Tower fire and make all existing high-rise buildings containing combustible cladding safe for residents and other people who access or use them."

The commission went on to accuse the government of breaching article 2 of the European Convention on Human Rights and schedule 1 of the Human Rights Act 1998, under which it is required to protect the lives of individuals.

"This paramount duty requires the state to take appropriate steps within its power to effectively protect the lives of individuals and groups in situations where there is a known real risk to life, or where the authorities ought to have known that," it said in its response.

"Unfortunately, over a year after the catastrophic loss of more than 70 residents' lives, many of the very systemic failings that led to the Grenfell Towner fire still exist now, giving rise, in our view, to an ongoing violation of art 2 ECHR/HRA by the state."

The EHRC acknowledged that "many" residential high-rise buildings that contain combustible cladding have implemented interim measures, such as hiring fire wardens and installing sprinkler systems, but expressed concerns over delays with removing and replacing dangerous cladding until the question of who pays for the work is clarified.

In some cases private leaseholders are being held responsible to finance the removal and replacement of combustible external cladding because freeholders or developers are not prepared to foot the cost.

"While a ban on combustible cladding is welcome, we strongly urge the government to rapidly speed up the scale of progress in addressing the systemic problems that led to the Grenfell Tower fire and which remain in its aftermath, the commission concluded.

The British Safety Council (BSC) said it welcomed the EHRC's challenge to the government that a failure to address the risk of life is a breach of human rights.

BSC chair Lawrence Waterman said: "The EHRC intervention takes a wider view and supports our long-held and consistent argument that health and safety is a crucial underpinning of the human right to life.

"We call on the government to take a much clearer lead and responsibility for past failures to protect life so tragically highlighted by the Grenfell Tower fire."