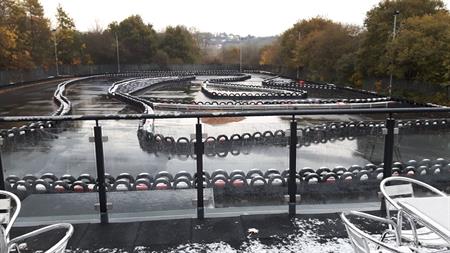 Barnsley Metropolitan Borough Council (BMBC), which brought the prosecution, found Tyke Leisure (trading as Tyke Racing) ignored its own risk assessments that it had carried out the previous year after another six year old was seriously hurt.

A court was told that in October 2016 the child was attending a "Cadet Drivers Club" training session at Tyke Racing. He crashed into a barrier on a hairpin bend towards the end of the 500 m circuit, hitting his head on the steering wheel and fracturing his wrist.

BMBC environmental health officer Stephen Butler found the electric go-kart the child was driving had a maximum speed of 40 kmph. Tyke Racing had not capped the vehicle's top speed and he had been allowed to race in a "Grand Prix" style event despite having crashed in the previous lap.

The child had not reduced his speed on approaching the sharp U-shaped bend.

Evidence provided by the boy's mother revealed he had collided with the barrier twice on his previous visit to the track, one in the same location and in similar circumstances to the crash that resulted in his injuries.

Butler served a prohibition notice on Tyke Racing that prevented under eight year olds being allowed to race.

The company previously had put control measures in place to stop children under eight from racing after a boy aged six sustained serious internal injuries in 2015. It also had updated its risk assessments and reduced the karts' speed for inexperienced drivers.

However, Butler's investigation found staff had ignored the new risk assessments. Tyke Racing had failed to implement guidance from the National Karting Association -- a membership organisation for operators of UK-based karting companies, of which Tyke Racing had been a member since 2012.

Tyke Leisure pleaded guilty to breaching s 3(1) of the Health and Safety at Work Act and was fined £55,000 plus costs of almost £7,000 at Barnsley Magistrates' Court. (See table below for how the District Judge applied the sentencing guidelines.)

The company's website now states the children's go-karts "are suitable for children aged eight and above with an inside leg measurement of 21 inches or above", while the Cadet Driver Club is for eight to ten year olds only.

How the judge applied the sentencing guidelines: