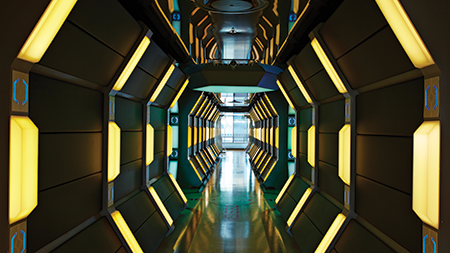 The first two decades of the 21st century have been marked by a multitude of societal upheavals and challenges, many of which were unforeseeable in the 1990s. The banking crisis in 2008, for example, was the worst global economic disaster since the Great Depression in the 1930s, and the effects still linger today in sectors such as housing. At the same time, new forms of advanced technology, including automation and digitalisation, have transformed the workplace and revolutionised how people communicate and interact with one another.

In the next few years, there is likely to be a further expansion of technology throughout society as a whole, particularly as we enter what has been termed 'the fourth industrial revolution'.

'Industry 4.0', as it is sometimes called, represents a trend towards automation, robotics and new manufacturing technologies and processes that include the Internet of Things and artificial intelligence. Many of these developments are likely to have both negative and positive impacts for workers and their jobs. The disadvantages of lower levels of employment and a decrease in the number of deskilled jobs can be set against the eradication of repetitive work and greater empowerment and scope for worker decision-making, for example (bit.ly/2kHc7Xc).

The OSH profession will have to adapt, [which] may entail moving away from established patterns of career development

In common with all forms of innovation, the outcomes and impact of Industry 4.0, alongside other trends -- such as the gig economy with its more flexible working arrangements, short-term contracts and freelancing -- are difficult to assess. More certain is that the OSH profession will have to adapt. This may entail moving away from established patterns of career development and towards new areas of competency, skills, knowledge and training. We might then pose the question of what the OSH profession is likely to look like in the era of Industry 4.0. Some clues to answering this can be found in what employers already see as the key skills needed by workers in the future, alongside research that has examined the types of career development trends now under way.

A survey this year by the Duke of Edinburgh's Award Scheme (bit.ly/2mlg2d8) found that 95% of UK senior managers regarded 'soft skills' as equally, or more, important than exam results alone. Around 98% recommended that young people invest more time in enhancing such skills -- including communication, teamwork and leadership -- to get ahead of the game in the competitive job market. Nine business leaders in ten revealed they were more likely to employ a candidate who showed achievements beyond grades. Indeed, those who showed evidence of strong soft skills often progressed faster in the workplace. That is not to say technical knowledge is not important; rather, technical skills need to be complemented by people-based skills and competencies.

Further support for the shift towards soft skills -- sometimes called non-technical -- can be found in research examining how jobs and careers have changed in recent years. Professor John Arnold, of Loughborough University, has identified a number of 21st-century careers trends, including what is sometimes termed the 'boundaryless career' (bit.ly/1WCZSnO).

This is sometimes viewed as having an advantage over traditional career models, which assume an employee will work for one company for most of their life and have the opportunity to progress through a vertical sequence of jobs. The boundaryless career encourages mobility, flexibility, the development of knowledge and networks, and the taking of responsibility for one's own path. It is a model that resonates effectively with temporary organisational structures and temporary projects rather than permanent structures.

Another trend illustrated by Arnold is the 'protean career', which describes how the individual drives the direction of their career as opposed to the employer. An individual with a protean career -- or one who is protean -- is thought to put self-fulfilment and psychological success above concerns and norms that would have their source outside the individual. Psychological success is considered to be subjective success on the person's own terms in contrast to objective success, such as increases in salary or promotion.

A final trend, 'job crafting' is more about how an individual makes changes to their own job rather than to their whole career. It involves them redesigning their own job in ways that can foster satisfaction, engagement, resilience and general wellbeing at work. Examples include an employee who wants to improve the quality of relationships they have with co-workers. This person might choose to craft their job by deciding to play an active role in their company's mentorship programme. This gains them experience in a leadership role and potentially increases productivity in their workplace.

All of these trends in careers and the future of work contrast with some of the more established and traditional characterisations of the OSH profession. The career of the OSH practitioner of the future may not conform exactly to the descriptions of the boundaryless or protean individual, but there is already evidence of an emphasis on balancing technical with softer skills, and recognition of the importance of self-managing career directions and choices.

A glance at current job adverts in the OSH field emphasises, on the one hand, technical competencies (say, the ability to investigate and record incidents, and undertake risk assessments and site inspections), but also the expectation that candidates are calm, patient and assertive, and have excellent negotiation, communication and interpersonal skills.

Shifting the OSH profession in the direction of improving the latter set of skills and personal attributes is one of the drivers for initiatives such as the new competency framework, which is being introduced by IOSH (bit.ly/2nNnrlV). It is the precursor to a new professional journey from the institute to

help OSH professionals to review their current skills, then identify and address gaps in order to achieve individual goals. Fundamental skills, such as communication, leadership and other types of soft skills, will be key (see 'Changing landscape', IOSH Magazine, October 2019: bit.ly/2LLQlMM).

Skills such as analytical thinking, problem-solving, and the ability to carry out research and critically evaluate evidence will feature in future OSH curricula. None of this will be achieved overnight, but if we are to reap the benefits of what Industry 4.0 promises, we will need to take these types of directions. The future of OSH education, training and career development is exciting and at the same time daunting. However, some of the new developments in the OSH profession referred to here will steer us in the right direction.