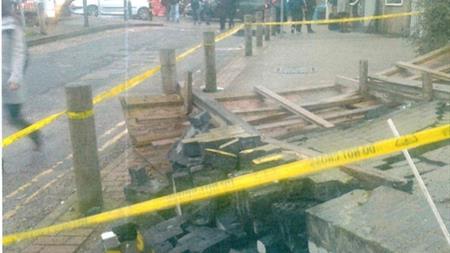 Southwark Crown Court was told that "serious failings in safety management" contributed to the incident on 25 January 2014.
A family of four was hurrying along a pavement towards Catford railway station to shelter from a storm when the father, 45, was struck by a wall and hoarding.
He was knocked unconscious and taken to hospital with face and skull injuries, including a fractured eye socket, and had to have a titanium plate put into his left cheek.
The family, including the children who were four and nine at the time, remain affected by the incident, the court heard.
The Health and Safety Executive's (HSE) investigation found that GLA Land and Property (GLAP) had employed a company to manage and maintain the site. However, GLAP failed to oversee the contract properly, resulting in the wall not being taken care of.
The wall was weakened by a crack, the HSE said, which caused the hoarding to "act like a sail in strong winds eventually leading to its collapse".
GLAP pleaded guilty to breaching s 3(1) of the Health and Safety at Work Act and was fined £250,000 and ordered to pay costs of £14,653.
HSE inspector Ian Shearring said: "A set of simple arrangements to inspect and maintain the wall would have picked up on the imminent danger to any passer-by. Instead, a whole family was traumatised by seeing the father sustaining serious injuries from being struck by hoarding as it collapsed.
"It was only a matter of luck that no one was killed on the day outside a busy station."
Topics:
Control of contractors
Construction
Retail
News