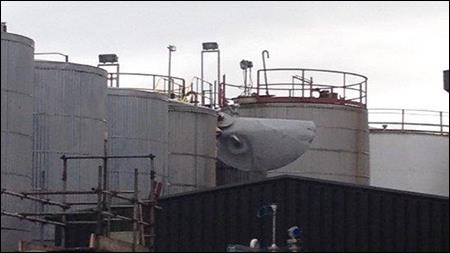 To temporarily remedy the issue, ESL used relief pipework to connect the leaking vessel to an emergency dump tank to collect foam.

This caused combustible gases to build up and create a flammable atmosphere in the pipes and secondary tank.

On 19 January 2015 an ESL contract worker used an angle grinder to cut one of the pipes that joined the two vessels. The flammable gases in the pipe ignited and the build-up of pressure caused the lid of the dump tank to detach.

The Health and Safety Executive (HSE) found that ESL had failed to inform the contractor of the process works taking place at the facility.

After the hearing HSE inspector Matthew Lea said: "Even though nobody was injured, this incident could have been prevented if the work of the contractors had been controlled.

"The contractors were given a very basic induction and were not told about health and safety issues in relation to ESL Fuels being a COMAH [control of major accident hazards regulations] major hazard site. Contractors were not warned about the process work being carried out in the north blend tank farm and how it could impact on them."