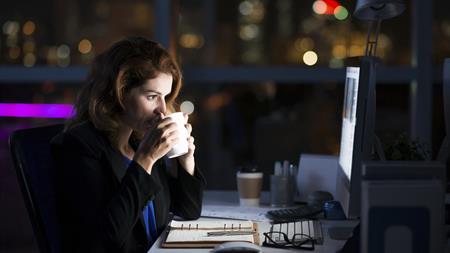 Researchers concluded that there is a probable link between night work and weight gain. ANSES says that eating sweeter food could be a "compensatory homeostatic response to sleep deprivation" -- which shift and night workers are known to suffer.

Assessment of the health risks for professionals exposed to atypical working hours, especially at night draws on analysis of data in scientific articles and reports. The assessment was carried out by ANSES through an expert committee, together with the French National Institute for Health and Medical Research and national agencies in Europe and North America.

"Several of the studies, in particular the case-control studies, showed a significant association between shiftwork, including night work, and weight gain," say the assessment's authors, though they admit epidemiological studies do not provide enough evidence for the link to be stated conclusively.

The literature review found night workers were also more susceptible to cardiovascular diseases, including coronary heart disease and high blood pressure, and more likely to contract Type 2 diabetes.
There could be a link with mental ill-health because night shiftwork can influence psycho-social risk factors and sleep disorders. The appraisal says mood disorders, depression, irritability, anxiety and personality disorders are commonly reported among night workers and may be a result of the disruption to the body's circadian rhythm -- the natural cycle governed by factors including daylight exposure and temperature.

The assessment also highlights the body of research showing changes to the circadian system as a result of night shiftwork could increase the risk of cancer.

It notes the "possible link" with breast cancer in women. Factors include the number of years nights are worked, the intensity -- total night shifts per week or month, the number of consecutive nights and the total number of nights worked through the whole career. However, ANSES says it is not possible at this stage to draw a coherent picture.

There is little evidence to suggest a link between night or shiftwork and other cancers such as those of the prostate, lung, pancreas and ovaries.