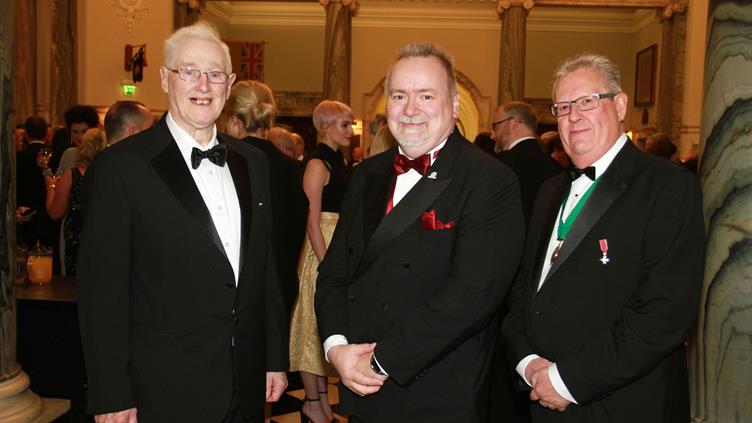 Wilson Lambe MBE and James Cochrane were among the six original members who formed the Northern Ireland group of the Institution of Industrial Safety Officers (IISO), which later became IOSH.

Their role in the branch's formation in 1966, and subsequent dedication to the institution over the past 50 years, was recognised by IOSH during an evening of celebrations at Belfast City Hall on Friday 15 April.

IOSH chartered fellow Wilson, 72, and life member James, 83, received certificates from IOSH president-elect Graham Parker, with around 140 guests having gathered to mark both their and the branch's milestones.

Wilson, a member of the Northern Ireland branch's committee and a former member of IOSH's Council, said: "We felt that there was a need for a branch to be formed as health and safety was just really starting to take off at the time.

"To start with there was six of us but the membership has grown and grown over the years to the extent that we now have over 750 members across the country. We also have six members in the branch that have been awarded an MBE for services to occupational safety and health.

Wilson, who served as IOSH president in 1988-89, said he was confident that the Northern Ireland branch would continue to go from strength to strength in the years to come.

"There are more and more people coming into the profession and we will continue to provide for them," he said.

IOSH Northern Ireland Branch chair, Richard McIvor, said the foundations laid by Wilson, James and the other original and early members of the branch continue to serve it, and the wider world of work, well.

He said: "They lay the foundations for relationships with the likes of HSENI and the Northern Ireland Safety Group (NISG) that have lasted and evolved over the past 50 years.

"A lot of people who were at the celebration have been with the branch from the early days and they have influenced the course of members' careers over the years. Many have seen it simply as part of their job, and for that we thank them.

"The challenge for us going forward is to continue to build on the branch's work over the past five decades to ensure that IOSH remains at the heart of efforts to make workplaces in Northern Ireland safer and healthier for all."

As part of its support for HSENI's Farm Safety Action Plan, the branch is funding demonstrations around the safe use and maintenance of chainsaws and quad bikes at this year's Balmoral Show in May.