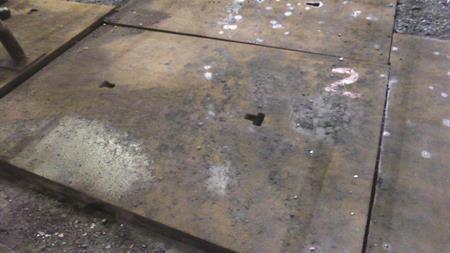 Steven Ayres was injured working as a scaler on the scarfing line, in which metal is torched to remove imperfections, at the steelmaker's billet mill in Stocksbridge, Sheffield. A billet is a cast or hot-rolled length of steel that can be further processed to make bars or rods.

Water runoff and impurities from the scarfing process were collected in a skip stored below ground in a pit 3.7 m by 2.5 m by 2.5 m and covered by two metal plates that sat flush with the floor.

On 26 February 2014, Ayres and an overhead crane operator removed the cover plates and lifted the skip out of the pit to empty its contents. After completing this job, the two workers went to replace the plates.

Ayres connected the crane hooks to lugs on either side of the first plate and the operator lowered it into position. As he did so, the plate swung slightly so, when the second was raised, Ayres moved out of the way. He stepped back and fell into the pit, sustaining a lacerated kidney and broken ribs.

Tata immediately installed guardrails around the pit's perimeter to reduce the risk of a fall, a work at height control measure it had identified in its risk assessment in October 2012.

The document said: "Look at designing a safety barrier around the open floor when floor plates have been removed to empty the scarfer skip."

He added: "For Tata to identify the risk and what is needed, to then take no further action is just foolhardy on the part of the company because you are putting everything at risk."

Judge Slater said during the sentencing at Sheffield Crown Court he could have imposed a fine of up to £800,000. But he had reviewed this in light of the fact the company is "materially smaller" than four years ago when the accident happened and to reduce the impact on members of the British Steel Pension Scheme, whose obligations Tata inherited.

"The judge was looking at not just the issue of the incident and the correct fine [in relation to the sentencing guidelines] but also the effect on Tata as a business," Welsh said.

He added: "But Tata placed themselves in that position because they didn't take simple measures that would have removed that risk from their business. To put a workforce at risk of death will never be acceptable."

The company pleaded guilty to breaching s 2(1) of the Health and Safety at Work Act at the earliest opportunity. It was also ordered to pay costs of £32,099.