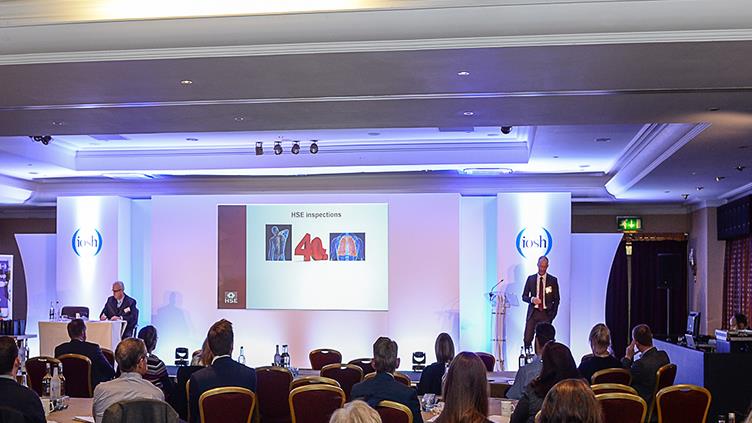 Representatives of food and beverage makers and distributors gathered on 10 and 11 October in Oxfordshire to gain new insight into cutting accidents and ill health in the sector.

Giles Hyder, the Health and Safety Executive's (HSE) policy lead for manufacturing, opened the sessions at the annual conference, organised by IOSH and supported by the executive. Hyder outlined the HSE's new manufacturing sector plan's three priorities: to reduce ill health such as respiratory disorders and MSDs; to control the risk of fire and explosion; and to cut the number of serious accidents caused during maintenance and by moving heavy loads.

He also highlighted a separate five-year strategy running from 2016 to 2021 that includes targets to reduce injury and ill health by 10% a year. This is led by the Food and Drink Manufacture Health and Safety Forum, which comprises representatives of manufacturers, unions and the HSE.

Hyder said the forum wanted members to provide figures on injuries and ill health so that it could build an enriched dataset to "make some evidence-based decisions on where we go". 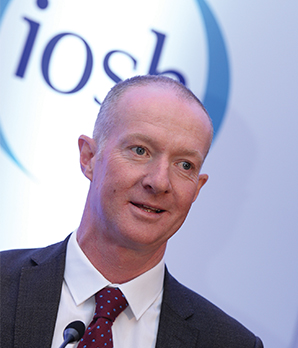 In 40% of recent inspections in the sector, HSE staff found companies failing to control flour dust or MSD risks, he noted.

Helen Beers, technical team lead at the HSE's Foresight Centre, described an interview-based study of the experience of older drivers of heavy goods vehicles. Beers said the drivers described increased pressure to make deliveries in tight timescales as a result of customer service innovations such as "click and collect".

"They are very good at dealing with this as they are so experienced," said Beers, but noted that the expectations do take their toll: "Some might not be able to get a break or food for eight hours."

The drivers risk putting on weight, she said, not just because of the sedentary nature of their jobs but because of their hurried breaks. "Getting food is an issue for them," she said, "particularly night workers who might only have access to burgers and chips."

The results of the study should interest those UK logistics companies with ageing workforces. Many are anticipating skills shortages, "so it is important they keep hold of the older drivers". 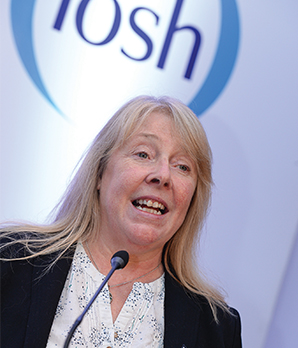 Joanne Crawford, of the Institute of Occupational Medicine in Edinburgh, broadened the scope of the discussion of older workers to review data gathered as part of the European Agency for Safety and Health at Work's campaign, "Safer and healthier at any age".

Crawford said the data showed that accident rates among older workers were lower than average but the consequences of mishaps could be more severe.

Other insights included a survey of EU workers that found one-third of 50 to 54 year olds thought they would be unable to do the same jobs when they reached age 60.

Crawford said evidence suggested that risk assessments for manual tasks were usually based on the capacity of under-50s and, as a result, there was a disparity between "work as imagined and work as done".

As in previous years, the conference coincided with the announcement of the winners of the International Food and Drink Health and Safety Awards.

One of the two runners-up this year was Allied Bakeries Southern Logistics for a pedestrian worker safety campaign at its site where 250 million loaves of bread (mainly under the Kingsmill brand) are distributed to south-east England each year. "We are hugely reliant on forklift trucks," said logistics manager Rickie Carr.

The initiative has cut the number of transport accidents by 66% since its launch in 2016. Carr said it encouraged workers on foot to treat forklifts as if they were lions: "Steer clear and don't approach." 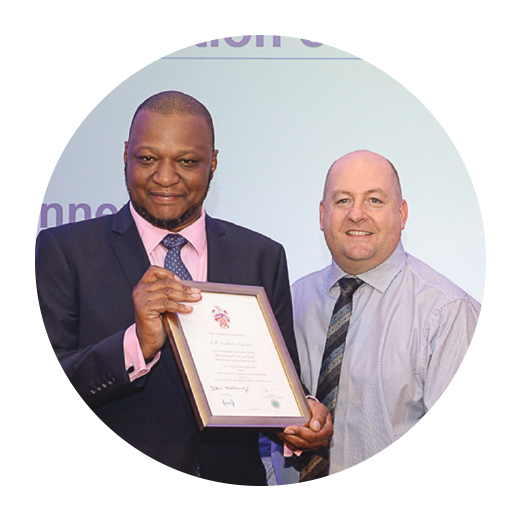 Dedicated truck lanes segregate vehicles from people walking on the shop floor. For areas with no such lanes a traffic cone system warns drivers off areas occupied by workers on foot. "This cone is owned by the pedestrian," said Carr. "It's an indicator to the driver that a pedestrian is there and he can't go in unless the pedestrian moves the cone."

Truck visibility and audibility were improved with reversing lights fitted on the vehicles at eye level and new reversing alarms. Pedestrians were educated on forklift blind spots using videos and photographs. "This was quite eye-opening for them," said Carr. "They couldn't believe that a driver might not be able to see them."

A new role was created for materials handling equipment (MHE) assessors, who evaluate the truck drivers. Carr said the company already had assessors to ensure its lorry drivers were legally compliant but there was no similar supervision of forklift operators, which was "fundamentally not right". The MHE assessors run "forklift truck driver of the period" awards before an annual winner is announced at a dinner hosted by the Allied Bakeries safety management team.

Joint awards runner-up was Green Isle Foods Portumna, which tackled flour dust and manual handling hazards at its factory producing frozen pizzas, pies, fish and vegetables in Galway, Ireland. The company had a problem with excess flour on its lead pastry line which runs 2.5 m above the ground. With no safe access point for vacuum cleaning, operatives had to sweep up the flour and put it into bags, which they carried down the stairs. 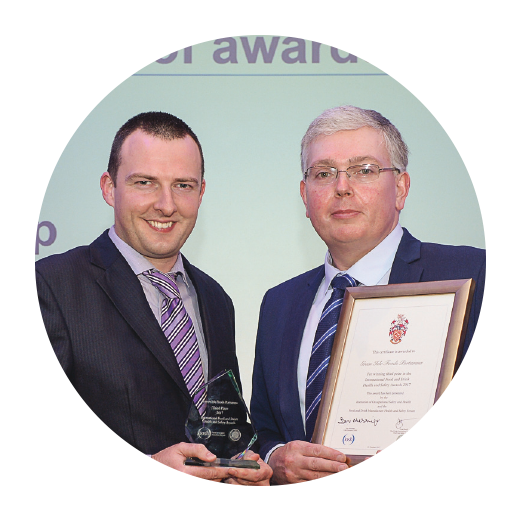 Projects engineer Derek Brogan said the process generated excessive airborne dust, along with work at height and manual handling risks. "Operatives were potentially climbing the stairs 20 to 30 times every night getting the platform clean," he said.

The solution was a £700 elevated suction unit connected to a pipe that runs up to the platform and a recycled computer panel for storing the vacuum cleaner's parts (tubes, hosing). "It's got rid of all the sweeping up, shovelling, bags on stairs and manual handling," said Brogan.

Green Isle also implemented new trolleys for machine minders to move heavy components from storage racks to one of five Kliklok packaging machines. Phillip Burke, an electrician at the company who designed the trolleys, said employees used to walk up to 80 m carrying two 24 kg dies, a back plate and a plunger.

The movable trolleys hold two dies, two back plates and plunger parts. "It keeps everything together and allows people to get ready for changeover in advance," said Burke, who needed finance for only the trolleys' frames and wheels.

The winner of the 2017 award was agricultural firm AB Agri after it rolled out a near-miss reporting programme to 600 employees, resulting in a 30% reduction in accidents. The company's programme will feature in a future issue of IOSH Magazine. 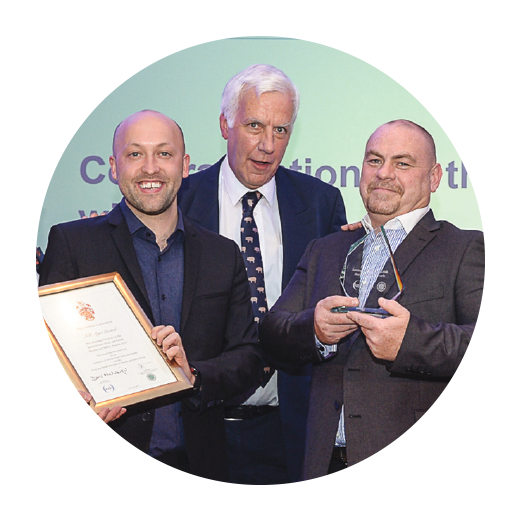 David Stancill, safety and health manager at Greencore Grocery, gave insights from his career working for British Coal, McCain Foods and NestlÃ© into practical employee engagement techniques. His tips included recognising when workers have achieved new qualifications from IOSH or the National Examination Board in Occupational Safety and Health, for example, and help them to apply their new skills in the workplace.

"When they do learn these qualifications, let them have time to put them into practice with fire safety, emergency procedures, warehouse management," he said.

He recommended inductions tailored to jobs to help to ensure maximum engagement from workers because "the last thing you want when you start an induction is [-¦] 70% of it isn't related to what you really need".

Stancill also warned delegates against relying on the "doers" in the business -- what he called "taking the easy option". This approach risked overburdening the enthusiastic employees while those less motivated were more likely to be involved in accidents, he said.

"Some people just weren't engaged with safety," said Phillips, who blamed "mistrust with the clipboard warriors". To re-engage staff, Molson Coors decided to put a family spin on safety. Last year it trained 1,300 staff and 500 of their friends and family how to perform cardiopulmonary resuscitation (CPR).

"This was a big investment but it was a very effective programme," said Phillips. "Because of the CPR training we gave the impression that health and safety is for the home, for the family, and that the health and safety department is there to help." The initiative contributed to the number of accidents "plummeting".