Filmmakers honoured by IOSH for safety and health at sea 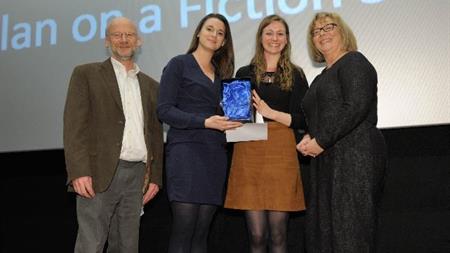 Producer Millie Marsh and production manager Katherine Pearl overcame gale force winds and enlisted the help of professionals including riggers, the coastguard and experienced sailors to safely create their ambitious short film, Those Who Are Lost.

Their work has been honoured by the Institution of Occupational Safety and Health (IOSH), which crowned them the winner of the Health and Safety Management in Film Production Award at the National Film and Television School's (NFTS) Graduation Show 2016.

They were presented with a trophy and £1,000 prize by IOSH's Thames Valley Branch during an awards showcase staged at Picturehouse Central, in London's West End, on Wednesday 24 February.

Producer Millie said filming Those Who Are Lost presented numerous challenges such as shooting in, on and near open water and the construction of a mock lighthouse interior which was the largest set build ever undertaken at the NFTS.

Millie, who currently works for 8 Forty-Eight Films and lives in East London, said: "The world of Those Who Are Lost is a place of darkness, of great peril, and of hardship. In order to convincingly portray this environment on screen, it was necessary to pursue some challenging locations that needed a lot of preparation from a health and safety perspective.

"A central part of our story involved the lives of fishermen and the perils at sea. It also followed the story of a man who is shipwrecked on an island, which resulted in shooting on boats, on shorelines and in rocky coves.

"In order to prepare for this we had to do a lot of research into tide times, maritime law and safety at sea. This research was invaluable, as was the guidance of the coastguard and the boat captain."

Production manager Katherine ensured the film was completed without any injuries or problems, and even acted as first aid responder on shoot.

She said: "It's a huge honour to receive this award and be recognised for the time and hard work that was put into making an extremely challenging film shoot safe for cast and crew.

"I think it is vitally important for the industry to recognise the importance of good health and safety measures. Working in so many different environments and locations that present varying hazards mean that you have to continually review the potential issues to maintain safety levels.

"The health and wellbeing of the cast and crew is crucial to a happy working environment, which leads to making great films."

It is the tenth consecutive year that the IOSH Thames Valley Branch has sponsored the NFTS award. Over the past decade, judges have watched around 80 films and assessed hundreds of NFTS students on their management of safety and health while on shoot.

Chris Stops, chair of the branch's judging panel, said the winners went "above and beyond" in how they had managed safety and health risks.

"Millie and Katherine's thoroughness, attention to detail and professionalism set them apart from all the other applicants in the view of IOSH judges," he said.

"Logistically, film production can be quite challenging in terms of safety and health. The winning students have always found a way to manage risk outside of the normal and straightforward.

"Safety and health management is not a hindrance on creativity. It in fact does the opposite by helping filmmakers to enhance their productions and create a better overall end product."

Simon Mallin, head of health and safety at NFTS, thanked IOSH for its support of the awards over the last decade, adding: "Whilst we may feel film and television production is a special industry, in terms of health and safety it is no different from any other work in the manufacturing sector.

"Legislation and standards of good practice are forever changing -- whether it is the use of temporary electrical power supply, the extension of the CDM 2015 regulations to include set construction, or the introduction of camera drone. IOSH provides the NFTS with a crucial wider perspective on health and safety which helps guide the school in how best to prepare students to stay safe in the challenging world of their future careers."