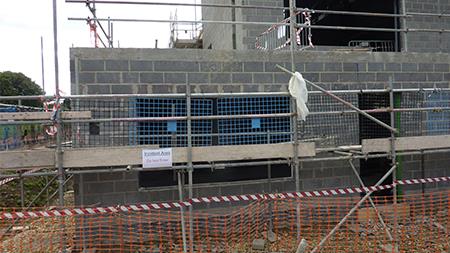 The 61-year-old employee had been asked to remove fall bags from the first floor of Sandal Endowed Primary School in Wakefield, West Yorkshire when the incident occurred on 26 August 2014.

The Health and Safety Executive (HSE) investigation found that the bags, which are used to minimise the risk of injury if someone falls, were too bulky to fit safely down the stairs, so the worker carried the large bags on to the roof and threw them over the edge. One of the bags became caught on the edge protection, dislodging it and taking both the worker and the fall protection equipment over the edge.

The George Hurst & Sons employee fell about 2 m and landed on the unprotected end of a scaffolding pole. He sustained broken ribs and internal injuries and later had to have part of his bowel removed due to infection.

The HSE found that employees had been exposed to the fall risk because the company had not put in place fall protection measures which met the British standard. This requires guard-rails, toe-boards, barriers and similar collective means of protection to be securely installed so that they can't be displaced.

George Hurst & Sons of Don Pottery Yard, Rowms Lane, Swinton, South Yorkshire pleaded guilty to breaching s 2(1) of the Health and Safety at Work Act. The company, which has gone into administration, has been fined £1.