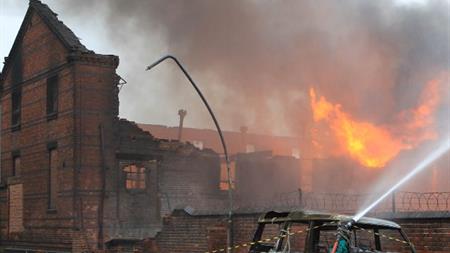 Wolverhampton Crown Court heard how the 21-year-old Alcohols Limited worker was transferring ethyl acetate -- a highly flammable solvent -- from a bulk storage tank to an intermediate bulk container on 26 November 2012. It is likely that an electrostatic discharge generated during the transfer process started the fire, the Health and Safety Executive (HSE) said.

The worker sustained 20% burns to his head, neck and hands. The fire destroyed the warehouse and damaged nearby houses and cars before West Mercia Fire and Rescue Services could bring it under control.

The HSE found pipework and associated valves on the premises were poorly maintained and not competently inspected. The company also failed to monitor the systems of work.

Alcohols Limited, which makes own-brand spirits including gin and vodka for retailers and is a division of the family-owned WH Palmer Industries group, pleaded guilty to breaching s 2(1) and 3(1) of the Health and Safety at Work Act. It was fined £270,000 and ordered to pay costs of £25,009.