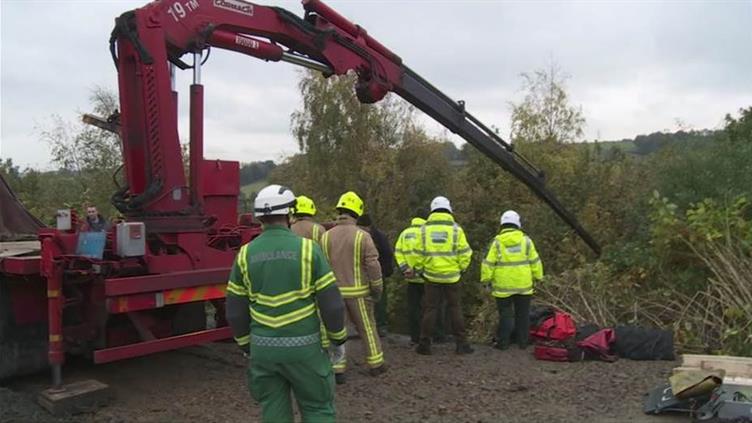 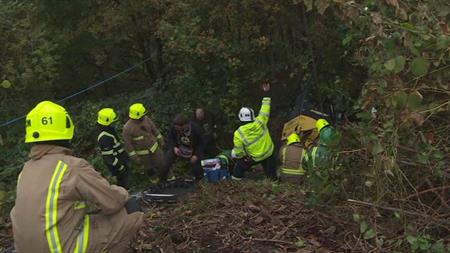 Quantum Exhibitions and Displays was extending the yard at the rear of its workshop in Hipperholme that was previously covered by vegetation, and hardcore had already been laid as part of the work.

The company's general labourer Daniel Willis, 26, had been tasked with compacting the hardcore with a 2.5 tonne Bomag tandem ride-on road roller the company had hired. The yard abutted a steep slope that led down to a footpath and watercourse.

The heavy plant was delivered on site on 7 November 2013 and Quantum's managing director Robert Bland gave Willis basic operating instructions. Willis began to compact the hardcore and Bland instructed him to drive closer to the edge of the embankment. Willis could feel the machine's nose tipping forward and so reversed as he did not feel safe.

The next day Willis was driving the roller while Bland and his son Alex, who managed the workshop, were inside the factory. It had been raining and Willis was driving parallel to the slope's edge. The ground either gave way or he drove over a large rock, causing the roller to tip off the edge and slide down the incline. Willis, who was not wearing a seatbelt, jumped out of the vehicle but it pinned him to the ground.

Seven police cars, six fire engines, five ambulances and an air ambulance arrived at the scene and the rescue operation, which took several hours, was filmed by BBC programmes Motor Cops and Helicopter Heroes. The emergency services used a crane borrowed from a local business to lift the roller.

Willis's right leg was broken in several places and it had to be reset at the scene. He also sustained burns and an open fracture to the index finger on his right hand and was left housebound for several months after.

HSE inspector Jacqueline Ferguson received the accident report and contacted Quantum for follow up documentation, such as risk assessments, training records and safe systems of work. Despite being told that Bland was away until 20 December and no one else was available to deal with her request, she was later informed by West Yorkshire Police that there were other employees on site at that time, including a site manager.

Ferguson told IOSH Magazine that when the documentation finally arrived, it included an internal accident report form with the accident date incorrectly showing as 15 November.

The HSE issued Quantum with two improvement notices. The first required the company to take action to prevent vehicles operating in the yard from running over the edge of the slope. Secondly, due to physical signs of ground instability, including tension cracks up to 2 cm wide, the company had to arrange for an assessment of the yard to ensure it was suitable for the storage of loaded shipping containers.

Ferguson said Quantum eventually complied with the improvement notices, but only after Bland's legal adviser intervened. There is now a 2 m exclusion zone at the far edge of the yard that cannot be used for storing containers until the ground's surface is recompacted and the gradient of the slope minimised.

Quantum's sentencing was at Bradford Crown Court, after it pleaded guilty to breaching Section 2(1) of the Health and Safety at Work Act for failing to ensure its employees were safe while operating a road roller. It had no risk assessment for compacting and flattening the yard, the ground at the edge of the top of the slope was unstable and there was no edge protection, and Willis had not been given any training in the safe use of the roller.

Ferguson said there were no practical problems or unreasonable costs that would have prevented Quantum from installing either a vehicle restraint or edge protection. She said a boom-mounted compactor would have eliminated the need for Willis to drive so close to the embankment's edge.

In court, Judge Jonathan Rose said that Bland "did not endeavour to help the HSE" and accepted that the documentation he eventually supplied to the executive "was of doubtful origin and falsified in an attempt to thwart the HSE's investigation". He said the managing director must accept a high degree of responsibility due to his "unhelpfulness and arrogance".

Ferguson said that while the judge "highlighted the aggravating features of obstruction of justice and falsification of documents, he had to take into account the company's previous year's losses in terms of accounts".