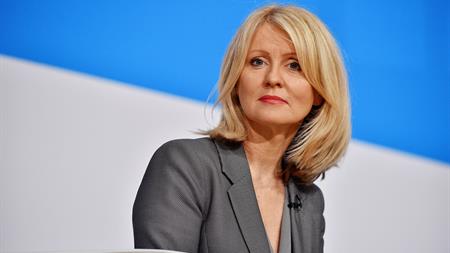 However, Labour and the GMB have both called on Prime Minister Theresa May to reconsider her decision.

McVey was in charge of the HSE in 2013 after taking up the role of Minister of State for Employment.

However, that part of her job was removed after it emerged she had been a director of J G McVey and Co, a former demolition company run by her father that was handed two immediate prohibition notices by the HSE in 2002 and 2003 at construction sites in Liverpool and Macclesfield.

The first related to the demolition of a five-storey office building where two unqualified scaffolders were working without guardrails, harnesses or hi-viz jackets.

The second was served after "a demolition operative was seen working at height outside edge protection / scaffolding", the notice said, and the risk of fall was 2 m or greater.

She was promoted on 8 January during Theresa May's cabinet reshuffle.

According to the Guardian, the shadow Cabinet Office minister Jon Trickett has written a letter to Theresa May in which he says: "As a director, [McVey] was one of the people ultimately responsible for endangering her workers. These violations happened on her watch.

"It begs the question whether it is appropriate for someone who has previously been in breach of health and safety regulations to be promoted to a role that is meant to protect people at work."

Dan Shears, national officer for health and safety at the trade union GMB said: "It has already been shown beyond question that Esther McVey is a deeply unsuitable person to be responsible for the health and safety of UK workers.

"She was the director of a business that put workers at serious risk to the point that the work had to be immediately prohibited.

"At best she'll be oblivious to the human toll caused by health and safety failings - at worst her cavalier attitude risks endangering workers.

"It beggars belief that the Prime Minister deemed it fit to hand Esther McVey a brief she had previously been unceremoniously stripped of in such murky and troubling circumstances."