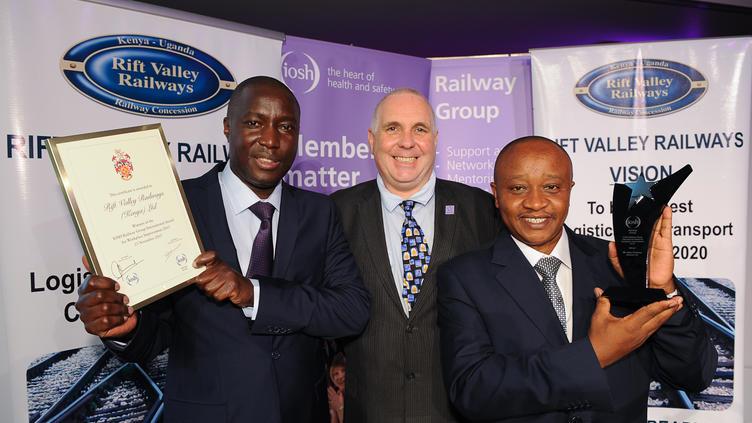 Each year, the Railway Group of the Institution of Occupational Safety and Health (IOSH) celebrates innovative projects in the UK and across the world that have produced a practical solution to, and made a positive impact on, an occupational health and safety problem in the rail sector.

It is seeking entries from all corners of the globe for its 2016 award, which this year has taken inspiration from the strategic objectives of the UK's Rail Safety and Standards Board (RSSB).

IOSH Railway Group Chair, Keith Morey, said: "Each year, we aim to raise the profile of workplace safety and health and promote lessons learnt through the award.

"We feel it is time to come together and explore shared learning from across borders, as there are always ways we can make our industry even safer. I'd encourage anyone who has taken steps to make their workplace a safer environment to enter this year's award."

The IOSH Railway Group International Award was won by Rift Valley Railways (Kenya) Ltd (RVR) last year, in recognition of it having used a mix of safety, environment awareness and behavioural change to drastically reduce the number of injuries in its workshops by as much as 90 per cent.

Tom Nyaga, occupational safety and health administration manager at RVR, said winning the award has "impacted very positively" on the company's image within the Eastern Africa region, and also on staff morale in general.

He said: "RVR entered the awards in 2015 in order for us to showcase our success story; that simple solutions like improvement on housekeeping, creating safety awareness and behavioural change can have a great impact on the overall safety in a workplace.

"The entire RVR fraternity was very delighted about the recognition at an international level of their efforts and commitment."

The award win has made it easier for RVR's administration to further engage with workers in safety and health initiatives, Tom said, adding that over 120 employees have also volunteered to be trained and appointed as safety representatives after the win.

He said: "Other rail companies should emulate RVR and enter the awards in 2016."

Entries for this year's award should focus on achievements which relate to any of the 12 priority areas contained within the RSSB's strategy, which was launched earlier this year and can be viewed in detail on the RSSB website.

Anyone involved in the railway sector can enter for the award, either as an individual or as a team. IOSH will accept entries from both members and non-members of the institution.

Projects must be original, unpublished and have occurred within the last two years. Entries should also be submitted in English and have employers' approval.

The closing date to enter is Monday 1 August. Entries will be judged by representatives from IOSH, the Office of Rail Regulation, the RSSB and the IOSH Railway Group.

The winner of the award will receive a trophy and certificate, as well as the chance to attend and present at the IOSH Rail Industry Conference in November. IOSH will also provide two nights' accommodation and a contribution towards travel costs.

Further details about the award, including how to enter, can be found online at www.iosh.co.uk/railwaygroup.