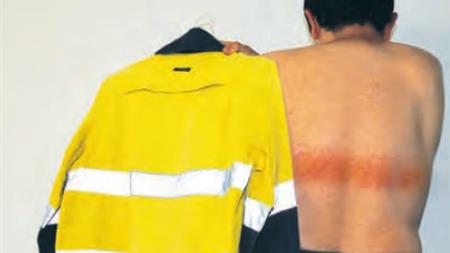 A letter to The Medical Journal of Australia from Doctor Iona Vlad explained she had treated a field environment engineer with first degree burns which matched the reflective strip of his shirt after a day's work in Pilbara, north of Western Australia.

The patient reported that the high visibility tape on his shirt often became extremely hot when he worked out in the sun, and he occasionally had to change its position, so the shirt didn't touch his skin in that area.

Doctor Vlad said she'd never seen anything like it before and couldn't find another case in medical literature. Though not life-threatening, it caused discomfort to the patient for a few days.

The strip material in hi-vis work gear is made of minute glass beads or prismatic elements encapsulated in a transparent film, which reflect light back to increase the wearer's visibility to others, especially in the dark.

Safety warnings mention cases of increased heat build-up around shoulders, neck and ears, but no cases have been published in medical literature. Skin abrasions have also been described when aged tape cracked and frayed and was brushed against the forehead.

Manufacturers also warn about the tape risk to smoulder or melt when subjected to heat.

"Workplaces mandating clothes with retro-reflective tape should ensure that garments with the tape in areas touching the skin are not worn in very hot and sunny conditions and consider using removable vests instead," stated The Medical Journal of Australia in its response.

"Manufacturers should consider designing shirts that decrease direct contact between retro-reflective tape and skin, potentially by increasing the number or thickness of cloth layers under it."