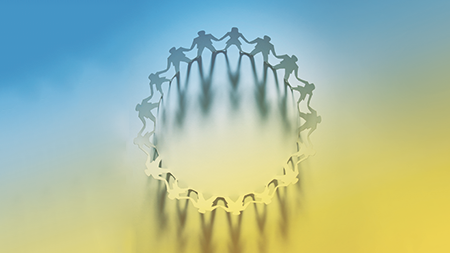 Procedures are the glue that holds together our occupational safety and health (OSH) programmes. Whether you are using paper systems, digital OSH software or mobile apps, all involve a procedure. The organisation and structure that procedures bring have undoubtedly contributed to improvements in safety over the past 30 years but, so common is their use, do we ever consider whether they are effective or desirable?

Despite their pervasiveness, critics argue that OSH has become too dependent on procedures. They also suggest that something that was intended to improve safety has become an impediment to it. What lessons can we take from these different perspectives, and how can practitioners improve the deployment of procedural controls?

Procedures serve multiple purposes, including defining safety-critical information, establishing an approved method of conducting a task or managing a risk, and meeting statutory requirements. Problems with OSH procedures have featured in many accidents in aviation, marine and rail, and were highlighted in the Pike River mining disaster in New Zealand in 2010 that cost 29 lives.

Much of the criticism of procedures focuses on the fact that the prescribed method of work is often unrealistic, too restrictive or not feasible, given the other demands the worker faces. The gap between procedure (sometimes referred to as 'work as imagined') and practice ('work as done') has become so significant that, according to Australian safety expert Greg Smith, the courts have developed a term to describe it: paper systems. At the heart of this debate is an important question: are procedures there to control workers, or are they a tool to engage them in developing safer solutions?

These two approaches were explored in IOSH research paper Management of Safety Rules and Procedures: a review of the literature (see diagram, below). Procedures have traditionally been hierarchical, and this remains the dominant approach - particularly for task-based activities and control of high risks, such as life-safety rules. With their origins in the scientific management movement, top-down style procedures seek to avoid errors and mistakes by limiting variation and defining a single best way. 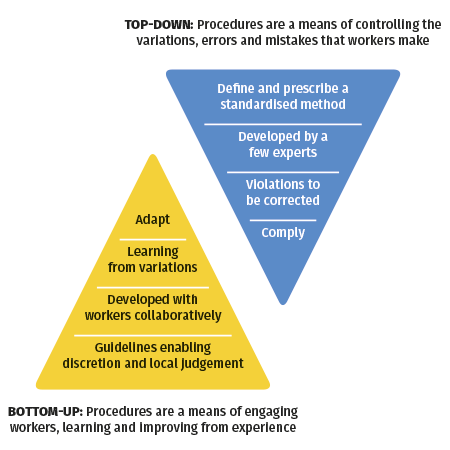 Conversely, more autonomy is provided with bottom-up type procedures that are often used with highly technical or complex work. These recognise that adaptation, interpretation and exceptions occur because of differences in the situation, task or environment. They are developed from the actual work and believe that the real safety expert is the one doing the work. To support the higher level of discretion, scenario-based training, such as simulators and exercises, are used alongside social controls and feedback systems to capture, review and learn from successes and failures.

The difference between these approaches is not a theoretical debate. It goes to the heart of how we view deviation and rule violation in the context of success or failure. For example, the International Association of Oil & Gas Producers report Life-Saving Rules claims that adherence to the organisation's life-saving rules could have prevented 70% of the fatal incidents that have occurred among its members. Critics argue, however, that many survivors of serious accidents used their intuition and experience to adapt to an evolving situation rather than strictly adhering to a procedure. Similarly, safety guru Sidney Dekker argues that linking procedural violations with serious accidents is flawed, because it selectively ignores the thousands of times when adaptation led to positive outcomes, such as process improvement or innovation.

Around 5.2 million adults in England have low levels of literacy, and many seek work in high-risk industries

These two approaches are not as polarised as they first appear, and most of us will probably be somewhere in the middle. The expectations of external stakeholders -- notably regulators and clients -- will often influence the approach taken. What can we learn from each approach? And, given the desire by organisations to simplify and digitalise their systems, how should procedures evolve? Here are five areas to consider:

How we think and respond to the variance between procedure and practice is at the heart of Dekker's 'Safety Differently' approach. Variance exists in every task, and workers continually manage this gap within the complexity of their work and the conflicting pressures they face. When variance is found between procedure and practice, stark choices can often be presented: we can seek to control and close the gap, or we can be curious and seek to learn from the variance. Perhaps the worker has found a better way to control the risk or conduct the task than those who wrote the procedure. When we are curious, we can often learn about the competing priorities workers face, and can be surprised by the challenge they encounter in applying the procedure. Trust, curiosity and desire to act on feedback help us to learn from work as performed.

Because of their relative low cost and ease of deployment, the fallibility of procedural controls can be overlooked. Regulators have previously stated that too much reliance is placed on procedures, particularly when they are used as the primary defence for safety-critical tasks. The question sometimes overlooked is whether more effective controls can be used to remove or reduce hazards, such as design, layout or engineering.

Procedures often fail because the demands that they place on individuals are impractical. The more complex a process is, the greater the pressures placed on individuals, and thus the higher the chance of error. Learning about the other demands placed on individuals -- particularly in terms of time and simultaneous activities -- will help to improve the effectiveness of the requirements. Consulting and piloting the procedures with the workforce are important. Indeed, consultation is at the heart of the new ISO 45001 standard.

The style and approach that organisations take to OSH procedures will depend on the culture of the organisation, the type of work it undertakes, and the regulatory context. The traditional approach of detailed step-by-step procedures remains the dominant style, particularly when the work is repeatable and different outcomes can be predicted. Work involving a high degree of adaptation, discretion and local initiative is more suited to guidance-style procedures.

OSH procedures can be long, complex or written in a way that makes them difficult for users to understand. Convoluted sentences, complex and technical language, or the formatting and layout of instructions, can all make it difficult to understand what needs to be done. Applying the suggestions for effective OSH procedures will help to make these procedures more effective.

It's not just the style of writing that's important - it can sometimes be the words themselves. Around 5.2 million adults in England have low levels of literacy, many of whom seek work in high-risk industries such as construction, transport and manufacturing. The fact that individuals who most need to understand OSH information may be those least able to comprehend can be easy to overlook. These challenges can be addressed by adopting visual literacy, such as using pictorial guidance or video instructions to visually demonstrate each stage of the task.

Procedures play an important role in OSH, but the frequency with which gaps arise in incidents demonstrates that improvements are required. Improving how procedures are developed, communicated and used will certainly help. Ensuring users are intrinsically involved in their development and iteration is equally important.