The End of Heaven – disaster and suffering in a scientific age 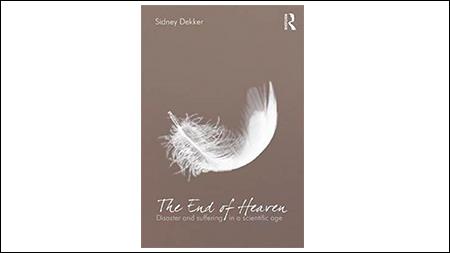 It opens with a first-person voice (Dekker's) recalling the death of an unborn child.

After hooking our attention with this tragedy, Dekker hastily switches to an inclement evening on the east coast of Scotland in 1879 and an impending train disaster. From this point each chapter begins by adding more to Dekker's personal story -- flicking between the heartbreaking scenes unfolding in the hospital and a blossoming romance with his wife-to-be, and then abruptly the narrative switches to an elaboration of his world view.

Dominated by an exploration of politics and religion, as it explores the moral development of society, and interspersed with paleo-anthropological and cultural remnants, Dekker strives to speed us through the world as he understands it.

At once wretchedly fascinating and intellectually demanding, and following the footsteps of Cicero, Plutarch, Calvin, Darwin, Leibniz and Marx, he engulfs the reader in what feels like encyclopaedic knowledge brought to bear on one spot.

Ten years after his children's story about a lion, a witch and a wardrobe, CS Lewis began a new book with the statement, "No one ever told me that grief felt like fear", as he mourned the death of his wife.

With The End of Heaven, Dekker fills the text with a sense of the same bereavement, pulling the audience into his feelings of loss which, at times, felt overwhelming for this reader.

The book's purpose is to expose us to a deep analysis of disaster and suffering in a scientific age and explore death (natural or accidental) as a "technical problem".

These aims are capably met with candour and some mesmerising, unexpected examples. Although the preponderance of religious and spiritual questions may be overpowering for some readers, the book is peppered with follow-up reading and references.

Dekker has become known for his clarity of explanation and incisive guidance. Fans of his previous excellent works on safety culture, human error and behaviour will find this book a radical departure from his usual pragmatic style and personable narrative.

Nevertheless, this is an interesting read, which, in Dekker's own words, seeks to "tell, to tease, and to tickle" the reader into reflection. Given the patience, concentration and open-mindedness it requires, I believe it will do just that.