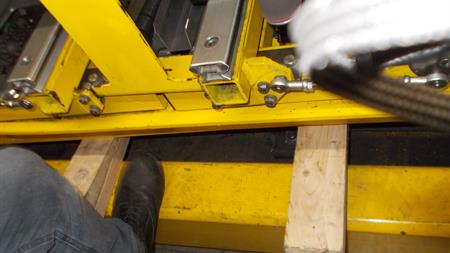 Although the team had activated the emergency stop circuit and assumed this would prevent the machine operating as work was carried out, they had not cut power to the control panel.

The incident happened on 28 April 2017 when employees from Logistex were refurbishing the ASRS at the Shop Direct distribution centre on Linney Lane, Shaw, Oldham.

The firm's employee was replacing sensors on the equipment's lift, which weighed around 800 kg, when it unexpectedly dropped around 1 m, trapping his foot between the lift and the frame of the truck on which he was standing.

His injuries were so severe that his second and third toes had to be cut back to the knuckle and his other three toes required explorative surgery.

An Oldham Metropolitan Borough Council investigation found that Kettering, Northamptonshire-based Logistex, which provides warehouse management, had poorly planned the refurbishment work at the centre which serves online shopping brands Littlewoods and Very and did not properly risk assess it. The company had not taken into consideration the risk of work being carried out on equipment that was still powered up.