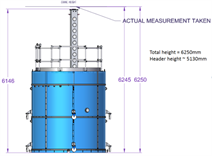 Dr Craig McEwan was working as a unit manager at Tesla Engineering when he died on 23 March 2018.
He had been heading up a team of researchers that was developing a new superconducting magnet coil for use in hospital magnetic resonance imaging (MRI) scanners, The Argus reported.
Whilst working on top of a tank, McEwan became caught between a moving gantry crane and a metal chimney and was crushed to death.
An investigation by the Health and Safety Executive (HSE) found the company had recently installed the metal chimney to the top of the tank and this increased the height at which staff had to work.
However, no measures had been put in place to ensure that the gantry crane was not operated while workers were in the area.
At Brighton Magistrates' Court, district judge Tessa Szagun was reported as saying: "I cannot find that this represented a systemic failure, nor can I accept that this does not fall far short of the appropriate standard. The organisation should have had proper controls in place."
She fined Tesla Engineering £400,000 and ordered it to pay costs of £7,546 after it pleaded guilty to breaching s 2(1) of the Health and Safety at Work Act.
HSE inspector Russell Beckett said after the hearing: "Tesla Engineering adapted the work process it carried out but failed to review [its] risk assessment or to take measures to ensure that workers could not be hit by the moving overhead gantry crane.
"Simple measures to either lockout the crane or to prevent workers accessing dangerous areas could have been implemented but were not on this occasion which ultimately led to Dr McEwan losing his life."
Accounts filed for Tesla Engineering, which designs and manufactures superconducting and resistive magnets for specialist applications in science, medicine and industry, show turnover of £48.4m was recovered in the year ending 28 February 2017, up from £39m in 2016.
Topics
Safe systems of work
Work at height
Workplace transport
Manufacturing and engineering
News