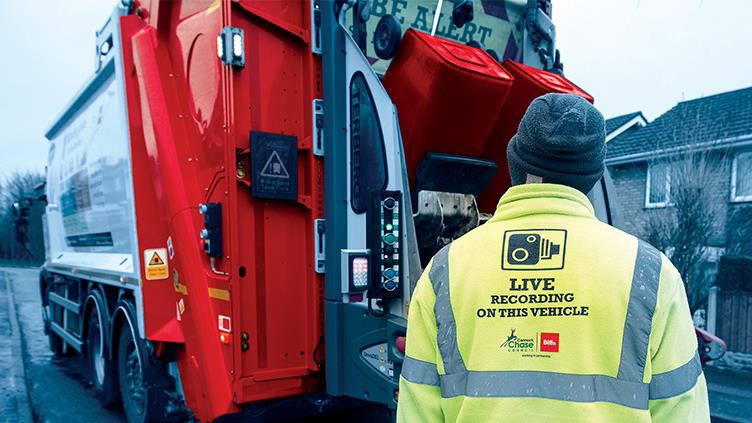 Biffa's kerbside waste and recycling collection teams routinely run the gauntlet of impatient car drivers mounting pavements beside them at speed to manoeuvre around the parked refuse vehicles.

The national recycling and waste management contractor took a while to grasp the scale of the hazard because crews seldom reported these near-misses.

"The difficulty is getting the workers to accept there is a problem; they are so used to it," says Dave West, Biffa's regional health and safety coach.

"Because they had no method of reporting the incidents to the police before the campaign, they just saw it as part of the job. They rarely reported them to their managers, let alone the police. Although it has now become one of the top ten near-miss issues that workers report in municipal collections, it is still under-reported."

The campaign West refers to is DRoPs (driving recklessly on pavements), launched in October 2016 to try to educate drivers about the risk they pose to the crews and other pedestrians. Video footage posted online (bit.ly/2PNnTtt), captured using vehicle-mounted 360° cameras, shows some operatives dodging the charging vehicles like matadors performing a paso doble. To date, Biffa has reported one injury to crew in Staffordshire from kerb-mounting vehicles, two in Kent and two in Norwich. 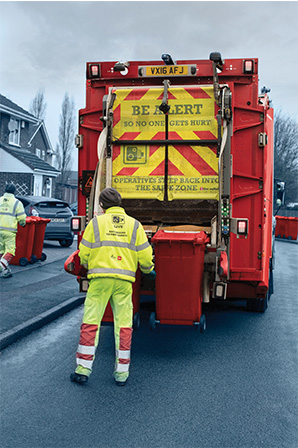 Although prosecutions brought by the police have confirmed that some of the reckless behaviour can be pinned on the type of drivers officers expected -- boy racers and delivery drivers -- the data reveals it extends also to the professions, including teachers and doctors, as well as parents on the school run.

"These aren't criminals," says West. "These are people who are just so focused on getting to their destination they fail to see the dangers in what they are doing."

When we were getting police forces involved, we realised as safety professionals we couldn't sit on this, so started sharing it

DRoPs aims to raise awareness of the issue and to minimise the number of incidents.

A pilot run in partnership with Staffordshire Police resulted in the development of a new system to help prosecute reckless drivers. Video of pavement driving is uploaded securely by operators to Biffa's DRoPs portal, together with a scanned, hard copy of the incident report, which is then emailed to the police to determine whether there is enough evidence to prosecute.

West says figures up to 2017 show one in three of the 300 incidents reported by Biffa crew in the police area since the campaign's launch has led to a prosecution, all successful.

For serious offences, drivers have had penalty points added to their licences. In most cases, however, they have had to attend a Driving 4 Change course.

To gain a view of the national picture of pavement incursions, West submitted a freedom of information request to the Department for Transport in 2017. The data he received covers 2011 to 2016, when the latest figures were produced, and reveals at least 10% of all pedestrian-vehicle collisions each year -- some 2,400-2,500 -- occur on the footway or road verge.

Two years since the campaign launch, however, the number of cases involving waste operatives remains high. West estimates there are 30,000 incidents a month across the sector -- extrapolated from Biffa's own monthly national average of 3,000 incidents. That its contracts account for about 10% of household waste collections in the UK adds weight to the estimate. 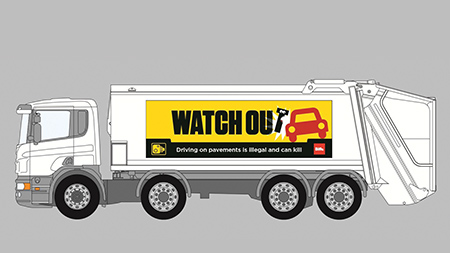 The campaign has begun to cause ripples among the other 90% and beyond. When IOSH publicised the campaign after Biffa's presentation at the institution's annual conference in November 2017, trade body the Highways Term Maintenance Association contacted West to highlight the issues faced by its road workers (bit.ly/2OSET4Y).

"Their problem is not people driving on to pavements. It's incursions," West says. "They are driving into the road works, driving through the cones and putting their staff at risk. They want a way of reporting it as well." (The OSH head at Highways England discussed this problem in an interview with IOSH Magazine in September 2017 (bit.ly/2xEuArX).

Although West says Biffa has been fortunate that nobody in its road crews has been killed, fatalities have been reported in other sectors.

West has continued to build on the success of the DRoPs pilot with Staffordshire Police. Through a combination of interventions, Biffa has continued to reduce the number of incidents. West admits that the biggest gains have been made where they have achieved most publicity.

These aren't criminals... They are so focused on getting to their destination, they fail to see the dangers in what they are doing

"Some of it is that [reckless drivers] didn't realise that the vehicles had cameras on them," he says. "That's the problem. They are not changing their driving habits because they are thinking, 'Oh, I really shouldn't be doing that'. It's more, 'Ah, they've got cameras'."

Historically, the operatives' use of hi-vis clothing has been problematic. Although it was intended to help workers to stand out visually, the clothing has become so familiar that drivers often ignore it. "Some members of the public look at them and they become invisible," he says.

The introduction of speed camera logos on the back of the hi-vis jackets has not gone unnoticed.

"We took over one contract and when we put the speed camera logo on the back [of the jackets], the first week the guys said they were watching the drivers slow down," he says. "The idea of that was not only to notify them that there is a camera on the vehicle but if it just stops them for five seconds to look for cameras, it's slowed them down. It works but it's not killing the reckless driving altogether. It's the awareness, publicity and the prosecutions that are key as well."

Training Biffa's own vehicle operators has also been key. "Our drivers are taught courteous parking," West says. "Every single road must be risk-assessed. If we determine it to be busy, they are not allowed to cross it. They've got to go up one side and come back up the other way.

"We are not allowed to go near schools when the pupils are going in and leaving," he adds. "But it leads collection drivers to use side roads, which can restrict the traffic flow. We tell our drivers to reduce that where possible. If they've got the opportunity to pull in, pull in." 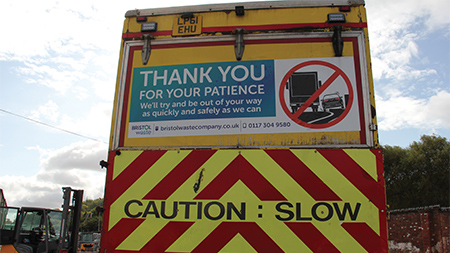 One area firmly on West's radar is educating business fleet operators and drivers about the risks. "I'd love to get into every large fleet company and say to them, 'I'm showing this video to your drivers because they don't realise they are going to get caught and risk their licences'."

He would also like big delivery companies to send warnings to their self-employed drivers if they commit misdemeanours.

Raising awareness among occupational drivers is critical, he says: "If we could somehow get DRoPs included into an area of the CPC (certificate of professional competence) syllabus it would get the DRoPs message out without having to contact companies directly, because professional drivers of vehicles over 3.5 tonnes must go through CPC."

West has contacted the Freight Transport Association and other CPC providers about the potential of including DRoPs in their training, and the initial interest is encouraging.

"If we can get on board the Joint Approvals Unit for Periodic Training, which approves and monitors the training centres and courses for driver CPC, that would be a massive step in reducing incidents."

West has also continued to work with other national waste and recycling companies and local authorities that deliver their own kerbside collections to encourage them to submit digital evidence and incident reports to the police.

Birmingham City Council, Europe's largest local authority, adopted DRoPs this year, while the Kent Resource Partnership, whose members are responsible for all waste collections in Kent, is planning a launch in February. West notes that some constabularies in England have adopted the Staffordshire Police model while in Wales the four forces have pooled resources and created their own digital upload system under Operation Snap, which also allows the public to submit potential traffic offences (https://gosafesnap.wales). 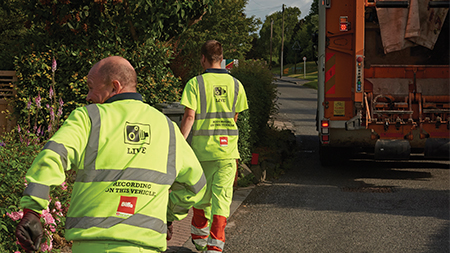 In July UK dashboard camera manufacturer Nextbase launched a national dash cam safety portal, which enables all road users to report incidents of dangerous driving to the police. Hosted by Egress Software Technologies, the platform allows motorists to upload footage and witness statements securely and precludes the need for the police to visit a witness to take a statement (bit.ly/2RZ2P4P).

West admits that, though IT has been the biggest hindrance to greater adoption of the DRoPs campaign -- "some police forces won't let any footage be uploaded for security reasons" -- the new portal is a step in the right direction.

Visitors to the site will see a map of England and Wales divided into police authority regions. Not every force is registered but for those that are and have a live reporting system, users click on the region and will be directed to an individual constabulary -- in Wales it is the link for Operation Snap -- where they can upload footage and submit an online incident report securely.

"The key thing about DRoPs is that we are not precious about it," West says. "Yes, we originally did it to protect our employees [but] when we were getting police forces involved, we realised as safety professionals we couldn't sit on this, so we started sharing it. That's what we want to continue to do, get more local authorities involved. We'd also like to get businesses on board to educate their drivers."