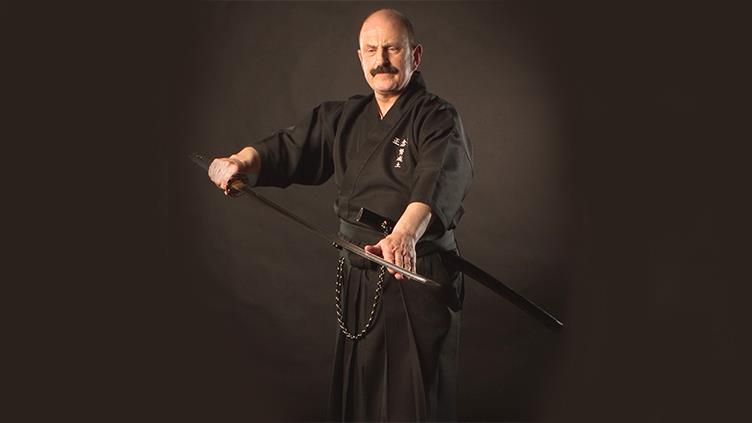 Iaido, pronounced ee-eye-do, is a Samurai sword art. The idea is to instantly draw and cut using a sword (known as a katana). As a martial art, it is more about mental and physical discipline: the emphasis is on technique and training focuses on kata, which are set forms. The sword I practise with is 77 cm long and razor sharp. We wear hakama (loose, pleated trousers) and a keiko gi (a training jacket).

Kendo is very dynamic, like a sprint, whereas Iaido is like a marathon. It builds you up at your own pace. It goes back hundreds of years, but it was formalised after the second world war. When you first start practising, you use a bokken -- a wooden sword. You use it to train: you can attack to prove that an opponent's block is working. As your confidence increases, you move on to an iaito, which is a metal sword without any sharp edges. This allows you to learn the dynamics of a sword safely. Then, as you progress further, you move on to a shinken, which is the sharp sword.

The benefits of Iaido are mainly mental. A common impression is that it is a physical challenge but you have to be able to train your mind as well as your body. It sharpens the mind and it helps when you are under pressure at work: because it is a discipline, it trains you to keep calm.

I am a member of two Iaido clubs in Glasgow. The club I joined first, Shonenjiku, is on the west side of the city, and three years ago I became dojo (training place) leader for Kensaki, a club on the east side. At one club I have higher grades teaching me, while at the other I teach others. At both there's a sense of camaraderie.

In Samurai times, if you bumped into somebody, it would have been an instant fight to the death

Iaido gives you a feeling of satisfaction that you are progressing. I usually train three times a week, and each session is two hours. There are six grades, though we don't have coloured belts like in karate. We grade at particular times during the year; members of the grading panel have to be at least two grades above you. In grading and competition, the judges look for correctness. You are looking for perfection in the physical and mental aspects of how you carry out manoeuvres.

People sometimes ask what you need to do before you start Iaido, but you don't need to train beforehand. Just go along and you will build up your fitness as you go. There is no need to be physically strong -- we've had guys at the club who have had knee operations. Iaido is accessible to men and women; children can practise it too.

It's not too expensive to take up. The club can provide the bokken. The only significant expense is when you move on to an iaito, which can cost £200 to £300.

I am the health and safety officer for the British Kendo Association. Day to day, it's mostly common sense. We have risk assessments: it's tight; everything is precise. In Samurai times, if you bumped into somebody, it would have been an instant fight to the death, so we have inherited customs that are about being courteous. It's very much about safe procedures. Before training and at seminars [training events], we'll check swords and equipment before we start and we also do snap inspections.

Iaido is all about self-discipline. There is no tolerance of aggressive behaviour but I have not heard a voice raised in anger. If you are not able to discipline yourself, you should not be in the hall.