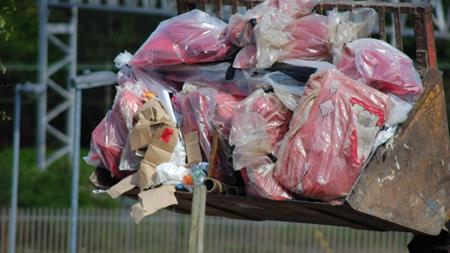 George Talbot and his sons, Anthony and Stephen, who ran waste management firm Alsager Contractors, which went into liquidation in 2016, were prosecuted after a joint, two-year investigation by the Health and Safety Executive (HSE) and the Environment Agency (EA).

The joint operation focused on the company's management of waste at three facilities between 2011 and 2013 -- Winghay Close, Kidsgrove and Peel Street at Longbridge Hayes Industrial Estate in Longport, Staffordshire and the Heywood Distribution Park on the Pilsworth Road in Heywood near Bury, Lancashire.

According to The Stoke Sentinel, the HSE and EA were contacted after Newcastle Borough Council received a complaint about burning and asbestos dust at the Kidsgrove site on 25 January 2011.

Investigators found that George Talbot knew that waste containing asbestos was being deposited at this site without an environmental permit from the end of January 2011 to 12 February 2011.

Inspectors also investigated the Peel Street premises and took 42 samples from bags, the site and the surrounding highway and found 36 were contaminated with asbestos. They also found an open skip containing asbestos-lagged pipework.

Stoke-on-Trent Crown Court was told on 9 July that the HSE had served a prohibition notice on Alsager Contractors on 10 May 2012 to prohibit work on six road-going ejector trailers that contained or were contaminated with asbestos. The notice required that no work should be undertaken on the trailers except to carry out decontamination under the control of a licensed asbestos contractor. However, the notice was breached.

On 5 February 2013, an EA officer found that a door had been cut into one of the trailers that was subject to the prohibition notice, and which was parked at Peel Street, to enable access to the asbestos waste in contravention of the notice. The EA suspended and then revoked the environmental permit for Peel Street.

The HSE found that George and Anthony Talbot, the two company directors at the time, knew about the prohibition notice conditions and both had failed to prevent work which contravened it.

When passing sentence, the judge described the "flagrant breach of the prohibition notice" [s 22 of the Health and Safety at Work Act] in relation to Peel Street.

"It is clear that the company, far from responding to earlier warnings about their handling of asbestos, continued to create risks and deliberately disregarded a prohibition notice."

The joint operation also found evidence that all three defendants knew about waste containing asbestos being treated, kept or disposed of at the Longbridge Hayes Industrial Estate which could cause pollution or harm to human health on and before 27 June 2011. Investigators found mechanical loading of asbestos that created dust emissions. George Talbot and Anthony Talbot pleaded guilty to the same offence for a later period, identified as on and before 8 February 2013.

In The Stoke Sentinel, Mark Harris, leading prosecutor, said: "Bags containing asbestos waste were loaded into skips using a mechanical loader, and then crushed down, so creating the risk that the bags would split and the potentially carcinogenic contents released as large volumes of dust."

The HSE and EA also found that the three defendants knew about waste containing the hazardous material being deposited in a trailer at the Heywood Distribution Park site without an environmental permit on and before 28 June 2011.

George Talbot was disqualified as a director for seven years and handed a £46,500 fine after pleading guilty to the s 22 of the HSW Act breach (£7,500) and four environmental offences, which fell under the Environmental Protection Act 1990 and the Environmental Permitting (England and Wales) Regulations 2010.

According to The Stoke Sentinel, recorder Stephen Thomas told the court: "I have to say I was considering a custodial sentence but have been constrained by the guidelines."