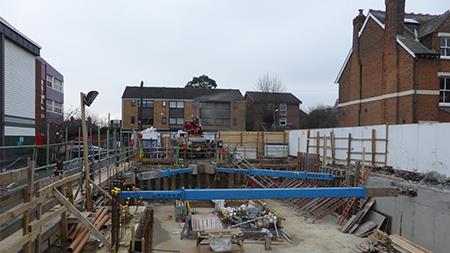 Twenty-six-year-old Kevin Hoare was attempting to clear a blockage when the incident happened at a housing development on Cranbrook Road, Wimbledon on 13 February 2017. Hoare, who had only joined Anytime McDaids two months earlier, was not being supervised and had not been provided with adequate training.

The Health and Safety Executive (HSE) investigation found that the concrete pump company was subcontracted to another subcontractor, which was installing a reinforced concrete frame for a four-storey residential building. Concrete was regularly delivered to the site by mixer lorry.

Westminster Magistrates' Court heard that the incident happened after concrete had been pumped to the required location on site.

As Hoare began cleaning the pump lorry, a blockage developed. He attempted to clear it but did not follow the manufacturer's instructions or guidance from the Construction Products Association. The HSE said that this resulted "in a sudden discharge of concrete and a cleaning ball, which struck and killed the operator".

The HSE found the company had no system to train operators to carry out the work safely, or arrangements to supervise them. Anytime McDaids failed to ensure the safety, so far as is reasonably practicable, of its employees and others who may be affected by their work due to the lack of adequate training and supervision. The firm's failings were due to the neglect of its sole director Laurence McDaid.

Sole director Laurence McDaid, of Tooban, Burnfort, County Donegal, Republic of Ireland, pleaded guilty to an offence under s 37(1) of the Health and Safety at Work Act. He was fined £2,600 and must pay £637 costs.

HSE inspector James Goldfinch said: "Concrete pumps have great potential to be dangerous when operated by those without suitable training, as they operate under high pressures."