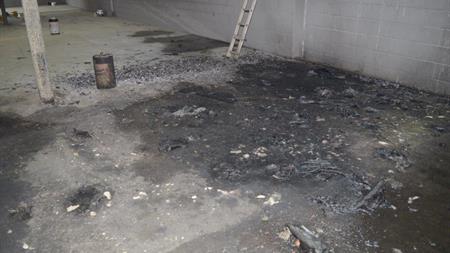 Brothers Ardian and Jashar Lamallari were working inside an industrial unit at the Rawmec Business Park site in Hoddesdon. They sustained almost 100% burns and died within 12 hours of the accident on 3 October 2015.

Luton Crown Court was told that Clearview Design and Construction had been contracted by the owners of the industrial estate to refurbish several units. Simon Thomerson, who ran the company, hired the two brothers and another man to carry out the work. The third worker was also seriously burned, but survived.

A joint investigation by the Health and Safety Executive (HSE) and Hertfordshire Constabulary found that Thomerson had supplied the labourers with several litres of paint thinner, a highly flammable solvent with a flashpoint of around 40°C, which they poured on the floor to remove old carpet tile adhesive.

He gave "no consideration" to how the product should be safely used, the HSE said, despite warnings on the containers.

The vapour spread over an area up to half the size of a tennis court and was ignited by one of several possible ignition sources identified by the HSE.

Thomerson pleaded guilty to breaching s 3(1) of the Health and Safety at Work Act. The judge described his actions as "willful blindness to the risks" and sentenced him to eight years in prison.

HSE inspector Paul Hoskins said: "The risks of using highly flammable liquids are well known and employers should make sure they properly assess the risks from such substances, and use safer alternatives where possible. Where the use of flammable solvents is unavoidable, then the method and environment must be strictly controlled to prevent any ignition."