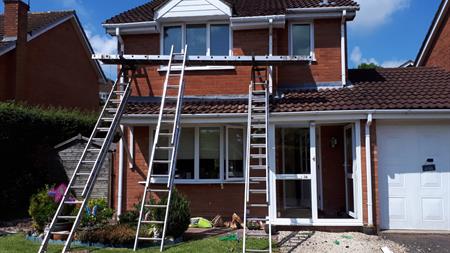 Barrie John Henry Birch was sentenced to 18 months' jail, suspended for two years, and disqualified from being a company director for five years after his firm, BBS Improvements, carried out unsafe and unnecessary building work. Workers were put at risk because there was no scaffolding.

The fraudulent activity was uncovered when a member of the public lodged a complaint with Worcestershire Trading Standards about BBS Improvements' work on the roof of a domestic property in Redditch in May 2017.

The council instructed an expert to examine the roof and confirmed that the work had been unnecessary and added no value. The investigation also identified potential safety and health failings and the council alerted the Health and Safety Executive (HSE).

Inspectors found Birch's employees working at height without scaffolding or fall protection. Birch was present and fully aware that workers were walking on the roof and had no protection.

At the time of the complaint, Birch was awaiting a court hearing for similar offences.

Worcester Crown Court was told on 11 October that Birch had previously been employed to carry out minor roof repairs on a domestic property in Bromsgrove in June 2016. After the inspection, he advised the homeowner that the entire roof needed replacing. However, an expert brought in by trading standards to examine the work after completion reported that the work had been unnecessary.

Birch was handed a suspended prison sentence, disqualified from being a company director for five years and ordered to do 250 hours' unpaid work. BBS Improvements pleaded guilty to breaching reg 6(3) of the Work at Height Regulations 2005 and was fined £200.