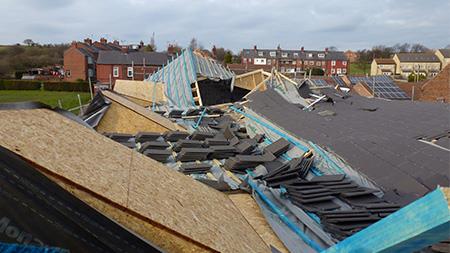 Jason Lycett, a director of Brooke Ren, was found guilty of breaching s 37(1) of the Health and Safety at Work Act at Sheffield Magistrates' Court over the incident, which took place on a building project in Barnsley, South Yorkshire on 24 February 2016. He must also pay £7,027 costs.

A Health and Safety Executive (HSE) investigation found that Brooke Ren, which was the principal contractor on the development at Church Street, Jump, Barnsley, had ignored instructions given in the preconstruction phase that the development's roof structure needed to be designed by a specialist. The project involved demolishing a former public house and constructing two, two-storey blocks of flats. Timber roof structures had been constructed for each block and were being tiled.

The HSE found the three roofers had been working on the roof of Block B and were transferring tiles from ground level using a tile hoist and distributing them over the surface of the roof when the hoist broke down. Two of the roofers had climbed down from the roof and the third was descending a ladder from a scaffold when the roof collapsed, demolishing a small wall at eaves level and distorting the scaffold.

None of the three roofers was injured. However, the investigation found that, had the tile hoist not broken down, the workers would have been on the roof when it fell in. The roof structure was not able to withstand the loads.

The HSE found that Brooke Ren, which had failed to employ a specialist to design the roof structure at the preconstruction phase, only did so after the incident.

HSE inspector Alan Sheldon said: "Principal contractors have an important role in managing health and safety risks during the construction phase, so they must have the skills, knowledge, experience and, where relevant, organisational capability to carry out this work.

"Although there were no injuries, matters could have been very different had the workers still been on the roof at the time of its collapse."