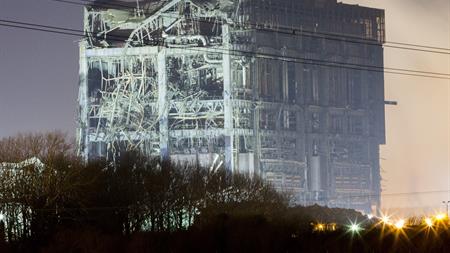 One person was killed and five were injured when part of boiler house at the former Didcot A power station in Oxfordshire collapsed on 23 February. Three men are still missing.

The joint statement said: "The site owners RWE have overall responsibilities for the safety of buildings and structure on their site. They must produce a plan for a safe method of working before the next stage of the recovery can begin. Once this is received and approved by HSE, emergency services are on hand to recover the missing men.

"We are working hard to identify as soon as possible what caused the building to partially collapse, to provide answers and prevent such a tragedy happening again. The priority of the multi-agency response remains the recovery of the missing men so they can be returned to their families."

Demolition contractor Coleman and Company, which is responsible for decommissioning the site, has confirmed the names of the three missing workers as Kenny Cresswell, John Shaw and Chris Huxtable.

A statement on Coleman and Company's website says: "We know how much they are deeply loved and missed by their families. We share their hope that our men are recovered soon and returned home.

"It is now two weeks on from the terrible incident at Didcot and our over-riding priority remains to support the families of those who have died or are, still, tragically missing."

The five workers who were treated for injuries have been discharged from hospital and are expected to make a full recovery.