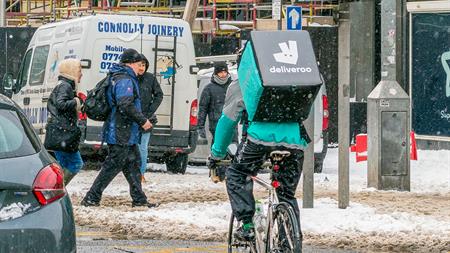 The ruling on 5 December, which dismissed a judicial review brought by the Independent Workers Union of Great Britain (IWGB), is a blow to gig economy campaigners seeking union recognition rights and workers' rights such as sickpay and paid holidays.

The High Court upheld a previous judgment by labour law body the Central Arbitration Committee (CAC) in November 2017, which had confirmed that the food courier's riders were self-employed.

The CAC rejected the IWGB's application to represent Deliveroo riders and concluded they could not be classified as workers or employees with the right to collective bargaining.

The committee had held that Deliveroo riders were not defined as workers by s296(1)(b) of the Trade Union and Labour Relations (Consolidation) Act (TULR(C)A) 1992, as they did not have a contractual obligation to perform work personally. Riders could offer a job to a substitute or decline work.

The CAC concluded that the IWGB could not rely on schedule A1 of the TULR(C)A to conduct collective bargaining on behalf of the riders.

The IWGB's judicial review had claimed that not allowing collective bargaining breached the riders' rights under article 11 of the European Convention on Human Rights (ECHR).

However, the High Court dismissed its application on two grounds. It concluded that under European human rights law, there is the right to bargain collectively in an employment relationship. However, the riders were not employed by Deliveroo.

The court also concluded that ECHR case law recognised that restricting statutory collective bargaining rights to workers with a contractual obligation of personal service was justified under article 11(2). This restriction was also covered by s296(1)(b) in the TULR(C)A. The court added that the restriction was proportionate and struck a fair balance between competing interests.

The IWGB has said it will appeal against the latest ruling. Its general secretary, Jason Moyer-Lee, said: "Deliveroo riders should be entitled to basic worker rights, as well as the ability to be represented by trade unions to negotiate pay and terms and conditions."

However, Deliveroo's UK managing director Dan Warne welcomed the decision. He called it "a victory for riders who have consistently told us the flexibility to choose when and where they work, which comes with self-employment, is their number one reason for riding with Deliveroo."