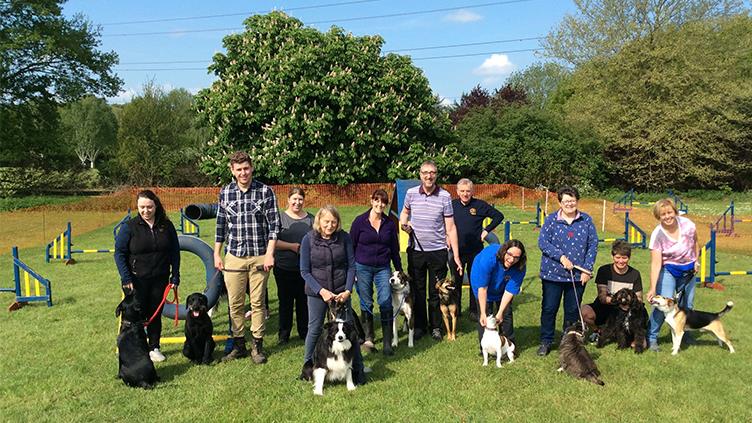 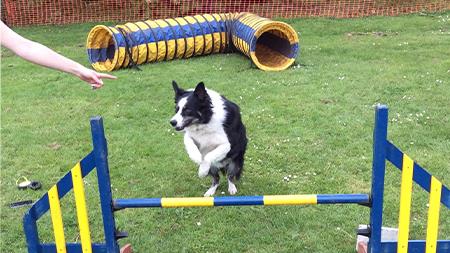 About 14 or 15 years ago, the same club needed a new trainer so I said I'd like to have a go. The lady who had been doing the training was leaving, so I spent some time with her. We did the classes together, and then I started running courses myself. I learned from the other trainers and by reading books.

I now run training courses every Sunday morning from March to early December -- they are all held outside in a field owned by a nursery so there are no classes in the coldest months. I arrive at about 9am to set up and the first class starts at 10am. That finishes by around 11.15am, then there's the advanced class. I get home at around 1.30pm. It does take up a lot of my free time but it's better now that I don't also do Saturdays.

I love being a trainer. You're training the dogs, but you're then also training the owners to manage the dogs. Ninety per cent of dogs (and owners) love the courses; there are only a few that don't take to it. You can have any variety of dogs in a class, small or large. Tall dogs have to crouch down when they're going through the tunnel, and we had one dog that almost had to crawl through!

I get a real buzz from seeing the dogs that found it difficult to begin with make progress and enjoy it. It's also great to see dogs you've trained go on to do competitions -- some are almost at Crufts standard.

Dog agility training is a break from my day job -- I call it my "out". But you definitely have to be health and safety conscious when dealing with animals, so my work crosses over into the training. We have to pay attention to the weather. If it's too wet, we don't run the classes. If it's hot, that can affect the dogs too: they might need more to drink, but not too much more because it can be heavy in the stomach. At first we put a lead on the dogs for some equipment -- for example, the A-frame -- to stop them jumping down. There is a lot of dynamic risk assessment to keep them safe.

We have around 60 dogs in the club: all different ages and breeds. There is a maximum of 12 dogs in a class, occasionally one or two more. We have two trainers on a course, so each looks after six dogs usually. There are two "runs" and we build up the equipment as the dogs become more confident. The beginner's course is ten weeks long, then there's a follow-up course, also of ten weeks. Some clubs offer private lessons, and some offer classes during the week rather than at weekends.

Agility training is great for dogs: it keeps them fit and can get their weight down if they're given a lot of treats. It can be fairly physical for owners too if they have a fast dog -- especially as the dog gets more advanced. As they say: if you want to get fit, get a dog.

We lost Jessica five years ago. We've now got a 16-week-old puppy, a blue merle (a type of collie) called Roxy, but she is too young for agility training. Dogs need to be around 18 months old before they're developed enough to start training: you can't let them jump too much when they're very young because it can damage their back legs. At the club, we have dogs ranging in age from 18 months up to six or seven years. I watch the older dogs a little more closely.

Some dogs are better and faster than others. Some come simply for the exercise and enjoyment. But, on a course, you'll often find there are one or two dogs that really take to it and could go and compete. Others might take to it less quickly, but they still get so much out of it.