I served 18 years in the army and when I left a friend suggested health and safety as a career. I did my NEBOSH certificate as part of my pre-release and joined Hampshire police as a civilian station duty officer, later becoming the Unison union's local health and safety lead. I worked as a local authority inspector for four and a half years, gained my NEBOSH diploma and then moved to the National Health Service (NHS), where I've been for 16 years.

During this time, I started running 10k races.

With my history of asthma, fitness has been a real motivation; keeping my lungs healthy drives me.

In 2011, I teamed up with some ex-army guys and did an "ultra" run in aid of veterans' mental health charity Combat Stress. It was called the Thunder Run, and we raised about £2,500. An ultra is anything above marathon distance. In general, they are 30-plus miles, and they can be 50 miles or more. 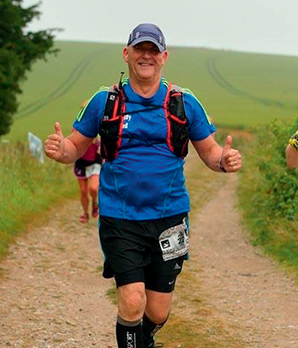 Some people start off with road running and move on to trail running. Some people run one ultra and they get the bug straightaway. I now run trails, ranging in distance from 10 km, through half-marathons and marathons, up to double marathons. Although this is off-road running, you do go across roads, but most of it is on trails or tracks, through wooded areas and across marshland. It's a lot better on the knees and ankles than running on the road. You also develop a much stronger core: you're changing direction a lot and running on uneven ground, so it works your core and your ankles a lot.

My daughter has joined me doing ultras. Last year, we did the Race to the King together -- a 54-mile non-stop race across the South Downs from Arundel to Winchester. We ran in aid of the British Heart Foundation in memory of a family member who died in 2016, and raised £1,400. It's a really good, well-organised race, and the setting on the downs is beautiful.

Running can be addictive, but when running ultras you're not going at the same pace as in a marathon. It's much slower, which allows you much more enjoyment of the environment. There are often beautiful views that enhance the experience. You carry food and water, and you have to learn how to hydrate and eat with gels and snacks. There is a lot of training: I ran more than 1,000 miles last year.

As well as the pure joy of running, one of the best things is the comradeship. Running ultras isn't like 10k runs, where everyone finishes at around the same time and leaves. If you're running a looped race, you're meeting people all the time. And in a point-to-point race, the support crews are fabulous. At every aid station you have food and water, massage and a medical team. You're supported by trained and qualified people at every stage. On top of that, lots of people do ultras to raise money for charity, and often some of the entry fee goes to charity, which is a good feeling.

The blisters can be a challenge: having six or seven on your foot at 40 miles and knowing you've got another 14 miles to go, that's an experience! But you work through it. You have to keep going. It's about coping with the mental stress -- and it's why you have to train. The emotions when you finish an ultra are incredible, especially when you're running for charity or for a loved one. It's really good to finish the race and see my wife Fiona there to meet me.

An ultra is anything above marathon distance... they can be 50 miles or more

You risk assess the run. You have to make sure you have the right kit for the weather and, as you run, you assess your hydration and so on. Health and safety is a bit like an ultra run: you know it's going to be a challenge, you have to pace yourself, you need the support of others, and you have to have the right equipment. Most of all, you need to look after yourself and make sure you get home safely at the end of the day. I find both health and safety and running very rewarding, and I have a good work-life balance.

It's a good mix of men and women -- probably around 65% to 35% -- and you have every age, from the younger runners in their twenties to the oldest guy I've met who was 84. An ultra race becomes like a big family.

Once you've finished a race, you're sore and in pain and you think to yourself that you couldn't do it again. Then five minutes later the euphoria hits you.