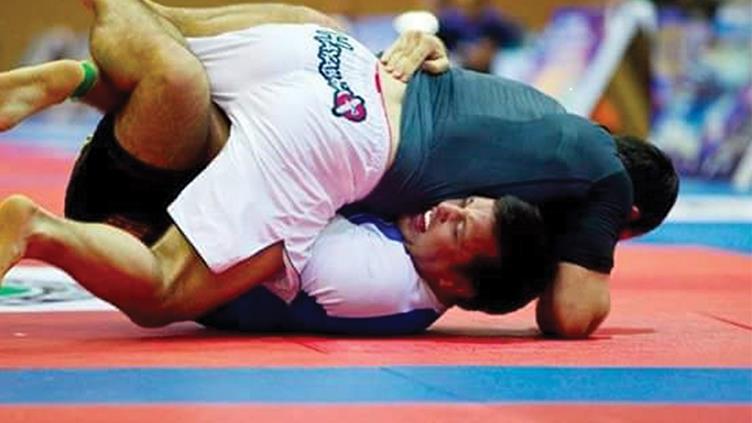 I wanted an activity that worked my mind and my body, so I found a local gym and that's where I was introduced to the martial art Brazilian jiu-jitsu.

Brazilian jiu-jitsu promotes the concept that a smaller, weaker person can defend themselves against a bigger, stronger, heavier assailant by taking the fight to the ground, then applying joint locks and choke holds to defeat opponents.

It's like a national sport in Dubai. When I started I was beaten up a lot. But as long as you put your all into it, you improve. It's a bit like chess; it's about thinking through your moves.

I started as a white belt. Two years of hard work and lots of bruises later I got to the next stage: blue belt. I have now achieved the third stripe in my blue belt; hopefully I can get one more and then I may earn my next belt: purple. 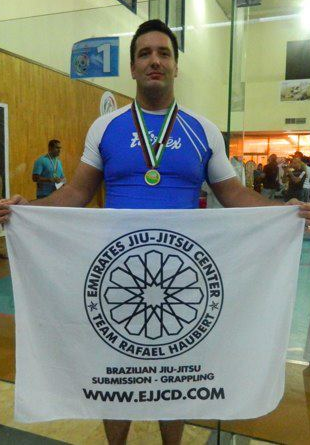 What I enjoy most about it is the problemsolving aspect. It's a risk-reward system. You can't just jump in without thinking because you might lose a limb. It's all about the planning: if you plan your moves correctly, the level of risk will go down.

It works my mind as well as my body, and it gives me the opportunity to meet new people from all different backgrounds and cultures. Professionally, in my current role as a health and safety manager in the UK, it has given me a better understanding of how to manage risk. It's reinforced that everyone faces risk: it's all about the steps you put in place to reduce those risks.

One thing that has surprised me is that it's never the same from one opponent to the next. When I was learning, in my first week I was fighting a member of the Uzbekistan Olympic wrestling team: he gave me a lesson in throwing people on their heads.

When I'm facing an opponent in jiu-jitsu, if I don't have a safe system, then I risk losing consciousness

It's a sport where no matter who you are or what your previous accomplishments, everyone starts in the same place: white belt. Now I'm at the point where I've won silver at a No-Gi tournament, competed at the world pro competition in Abu Dhabi, and at events in the Middle East, Thailand and the UK.

Jiu-jitsu is a way to challenge myself and develop new skills, and you can do it anywhere. Learning and competing in it has made me realise that no matter where you are or what you are doing, when it comes to facing risk, you need to follow the same principles. When I'm facing an opponent in jiujitsu, if I don't have a safe system, then I risk losing consciousness.

When I'm talking about health and safety with people at work, I talk about what I do in my life outside work and use jiu-jitsu as a guideline. When I was working in Abu Dhabi, I took the health and safety team to do some training at the local jiu-jitsu school. It was a way to demonstrate the importance of planning and minimising risk. It helps you understand the nature of risk, so that you ask yourself: why are you taking a risk? Is it because you are tired? Is it because you are hurrying?

Everyone faces risk in their lives in whatever they do. I would never encourage someone to be unsafe, but if there is a risk confronting you, you shouldn't see it as a wall -- you find a way to manage the risk, to work round it.

I would encourage absolutely anyone to take up Brazilian jiu-jitsu -- whether you are male or female, young or old. My little boy is starting to learn it from me and we're looking at a kids' training programme at our local school. It's really good for teaching coordination, respect, movement skills and being active. Most academies take children from two or three years old, showing them simple movements, enjoyment and confidence.

I train with all sorts of people, including some in their 70s and 80s. Brazilian jiu-jitsu has huge international reach, with a good following in places like the UAE and in the UK. It keeps you healthy and what you learn from it can help you professionally as well as personally.