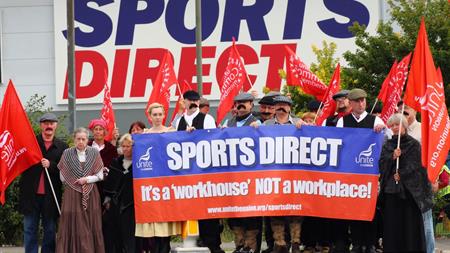 Citing evidence obtained by a freedom of information (FOI) request by the trade union Unite to Bolsover District Council, the report -- Employment practices at Sports Direct -- says that a finger amputation, fractured neck, crushed hand, and wrist, back and head injuries were just some of 115 incidents at the warehouse between 1 January 2013 and 19 April 2016. Seventy-nine of them resulted in staff being absent from work for more than seven days.

Sports Direct is the largest sporting retailer in the UK, with around 465 stores. BIS's inquiry into the company's working practices and business model began as a result of media coverage of treatment of its workers.

It said its findings of worker mistreatment, including staff not being paid the minimum wage and being punished for taking breaks to drink water and for taking sick leave, were "extremely disturbing". The committee called for Mike Ashley, the company's deputy executive chairman, founder and majority shareholder, to be held accountable for the poor working practices.

"The evidence we heard points to a business whose working practices are closer to that of a Victorian workhouse than that of a modern, reputable High Street retailer," said Iain Wright MP, chair of the BIS committee. "For this to occur in the UK in 2016 is a serious indictment of the management of Sports Direct and Mike Ashley, as the face of Sports Direct, must be held accountable for these failings."

During this three-year period there were 80 accidents reported under the Reporting of Injuries, Diseases and Dangerous Occurrences Regulations for the Shirebrook warehouse, Unite's assistant general secretary, Steve Turner, told the BIS committee. Turner said the problem was due to a crossover in the reporting processes, enforcement and inspection between the Health and Safety Executive (HSE) and the local authority.

In response to this, Bolsover District Council's chief executive and partnership manager, Pam Brown, said: "The council, from an environmental health perspective and under health and safety legislation, would be involved regarding the number of RIDDOR cases across the district of Bolsover and have shared information to date via the freedom of information requests. This would mean liaison with the HSE in terms of reporting."

The committee said Brown's response was "inadequate" because she did not comment on the "high number of reported RIDDOR cases", nor did she "give any reassurances about the preventative steps that Bolsover District Council is taking to reduce the number of these cases", it said.

Unite also found that paramedics were called to the 800,000 sq ft warehouse 110 times during 1 January 2013 and 19 April 2016. Fifty of these cases were classified as "life-threatening" and included incidents such as chest pains, breathing problems, convulsions, fitting and strokes. Five calls were from women suffering pregnancy difficulties, including one woman who gave birth in the warehouse toilets because she was scared to take time off in case she lost her job.

In their report, MPs concluded that the number of RIDDOR cases and ambulance visits to Shirebrook were "concerning" and urged Ashley to review the warehouse's safety procedures and to report back with his findings. They also advised Bolsover District Council and the HSE to "take a more active role in overseeing that health and safety provisions are being correctly adhered to".

Wright said: "It seems incredible that Mike Ashley, who visits the Shirebrook warehouse at least once a week, was unaware of these appalling practices. This suggests Mr Ashley was turning a blind eye to conditions at Sports Direct in the interests of maximising profits for that there are serious corporate governance failings which left him out of the loop in spite of all the evidence.

"The business model operated by Sports Direct, both at the Shirebrook warehouse and in the shops across the country, involves treating workers as commodities rather than human beings. Low cost products for customers and profits for shareholders come at the cost of maintaining contractual terms and working conditions which fall way below acceptable standards in a modern, civilised economy. This model has proved successful for Mr Ashley and there is a risk this will become much more the norm in Britain."

Ashley said he will set out steps for Sports Direct to stop these practices recurring. Unite has called for the company to replace temporary contracts with more secure employment to prove it is serious about improving working conditions.

IOSH has called for improved corporate transparency following the publication of the report.

Shelley Frost, executive director of policy of the institution, said: "We believe forward-thinking organisations are led by directors who provide leadership and direction of effective occupational safety and health, and deliver a culture for protecting lives and improving reputation, resilience and results.

"Clearly this has not been the case at Sports Direct, and we hope the company and its senior leaders now have a greater appreciation for the value of ensuring good occupational safety and health throughout its operations."