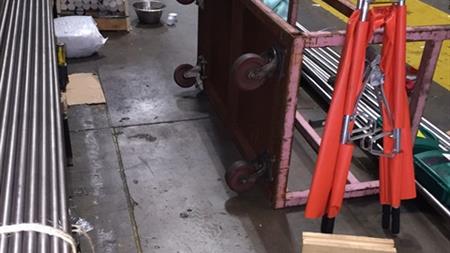 Luke Simpson and another member of staff were manually moving the four-wheeled trolley loaded with 18 metal bars and weighing approximately 900 kg at Smiths Metal Centres' site in Bedfordshire.

The trolley tipped over, Luton Magistrates' Court was told, and the bars toppled off trapping Simpson. He was taken to hospital with a broken leg and crushed foot, most of which had to be amputated despite multiple operations. He now has a prosthetic foot and has returned to work on a part-time basis only.

The Health and Safety Executive's (HSE) investigation found that Smiths Metal acquired several trolleys to be used as workstations and they had been on site for around 20 years without incident. However, employees were also using them to transport metal stock around the site and there was no risk assessment or written system of work. The trolley involved in the accident had faulty wheels and there was no maintenance record.

The trolleys have since been set a safe working load limit of 500 kg.