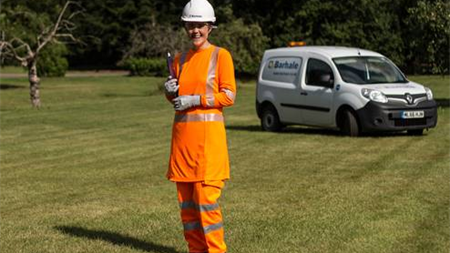 The range includes tunics designed to "allow women of all religions feel comfortable at work" along with clothing suitable for use by pregnant women.

There are now around 300,000 women employed in the construction industry in the UK, which means employers have a duty of care to provide appropriate clothing and personal protective equipment (PPE), says BCS.

A Trades Union Congress (TUC) report from 2016 found that 57 per cent of women thought their PPE hampered their work.

"Often employers think that all they need to do for women is get the same PPE for men, but smaller," it stated, an approach that risked causing "significant problems".

Women also found it "very difficult" to get suitable PPE during pregnancy, the document added.

"In sectors like construction and engineering only very recently have women begun to be more visible," it stated.

"Unless women in these sectors have the same access to safe and comfortable PPE they will continue to find it much harder to work on an equal footing to men. For that reason PPE should be seen as an important equality issue."

The range has been launched following extensive testing and field trials across BCS' parent company, Barhale.