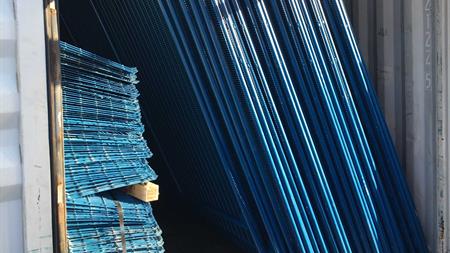 Blok N Mesh employee John Evans was helping to load fencing panels into shipping containers on 23 February 2017 when around 34 panels fell on him. He sustained multiple injuries, which included a broken left shoulder, fractured vertebrae in his neck, two broken ribs, contusions to his lungs, and soft tissue damage to his face.

The Health and Safety Executive (HSE) investigation found Blok N Mesh had had two previous incidents in identical situations but failed to devise a safe system of work. An HSE inspector told IOSH Magazine that only minor injuries were sustained in both cases.

Liverpool Magistrates' Court was told on 9 July that the London-based company, which also has manufacturing and distribution facilities in Knowsley, Merseyside and 18 nationwide depots, did not have control measures to prevent unsecured panels from falling.

The HSE found Blok N Mesh had failed to plan the work effectively.

Since the latest incident, the company has introduced a new system, which involves loading the fencing using specially designed stillages, eliminating the need for workers to be inside the containers.

Blok N Mesh, which won a Queen's Enterprise Award for innovation in 2016 for its work with on-ground fencing systems, pleaded guilty to breaching ss 2(1) and 3(1) of the Health and Safety at Work Act and must also pay £5,177 costs.

On 14 March 2017, the HSE issued Blok N Mesh with a prohibition notice after it had allowed "the vertical storage of fence panel and fence doors without any restraint or way of securing the panel and doors to prevent them falling" at the firm's Knowsley Industrial Park site.