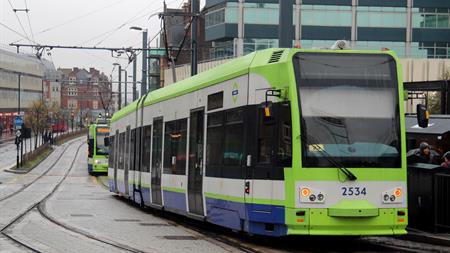 The device, which is a common feature on trams across the UK and Europe, is designed to activate when the driver fails to maintain pressure on the lever that increases the tram's speed. To pick up speed, drivers have to apply 0.68 kg of pressure on the lever. If the pressure is not maintained, an alarm should sound and an emergency brake be applied.

Tram Operations, which runs the light rail tram system, said that driver fatigue was monitored and controls were "fully functional". However, according to a BBC report, four current and former drivers have admitted that they have fallen asleep while operating trams in Croydon. The drivers also said that the safety device had failed to activate and stop their trams when this happened.

In November 2016, seven people were killed when one of Tramlink's trams derailed near the Sandilands Junction area of the town. An interim report into the crash suggested that the tram was speeding and that the driver may have "lost awareness". The investigation found that there was no emergency braking and the tram had been travelling at 74 kph before it derailed in a 20 kph zone.

The BBC report, however, made it clear that there was no suggestion that the derailment at Sandilands had been caused by the safety device failing.

A BBC investigation for Victoria Derbyshire's current affairs programme has found that at least three trams have been recorded speeding on the same line since the November 2016 crash.

Guidance published by the Office of Rail and Road (ORR) safety regulator states that the driver safety device should activate "in the event of driver collapse".

Further guidance also states the device should be designed "so that it cannot be kept in the operating position other than by a vigilant tram driver".

In response to allegations that trams exceeded speed limits in Croydon, Tram Operations said it had increased speed checks across the network since the crash.