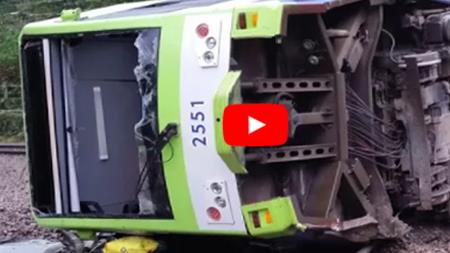 Watch RAIB video footage of the incident below

The RAIB finds no evidence that the shift pattern imposed by Tram Operations (TOL) had caused the driver's fatigue. But the report identifies weaknesses in safety provisions, including inadequate speed restriction signage and the lack of systems to check drivers' alertness or to apply brakes automatically if their attention lapsed.

Just after 6am on 9 November 2016, Alfred Dorris drove the tram on the route from New Addington to Wimbledon, south London, into the first of three closely spaced tunnels which extended 500 m near the Sandilands stop. He had reached the maximum speed of 80 km/h entering the tunnels and was still travelling at 73 km/h when the tram reached a steep curve on the far side where there is a 20 km/h limit. The tram derailed, leaving six people dead and 19 seriously injured.

The report notes that Dorris's "reported normal pattern of five and a half to six hours sleep before starting work at around 05:00 hrs is less than the seven to eight hours of sleep that most people need each night" and that it may have led to him building up a sleep debt and microsleeping at the controls.

Dorris was unclear about what caused the accident having no clear recollection. The report concludes there was no evidence his health or lack of fitness contributed to the incident.

The Sandilands tunnels had no features that would alert drivers to appropriate braking points to prepare for the 20 km/h limit beyond, the RAIB found, and the 20 km/h speed restriction sign placed before the curve beyond the tunnels was "too small and poorly reflective, so could not be seen until after the driver needed to apply the brakes in order to comply with the speed restriction".

On 31 October, less than two weeks before the accident, another driver had negotiated the curve at Sandilands too quickly after he had mistaken his position in the tunnel. The driver had braked late and entered the bend at more than 45 km/h, a speed at which the tram was at risk of overturning. The RAIB report noted that TOL did not investigate this incident fully until after the 9 November accident.

Overturning of a tram at Sandilands junction, Croydon (RAIB)